The oil and gas industry and its allies are pushing the Obama administration to consider offshore drilling everywhere it can grant permits, including the east and west coasts of Alaska.

Offshore producers say safety precautions have improved dramatically since the 2010 Deepwater Horizon oil spill, and argue no areas should be ruled out as the Interior Department considers offshore drilling sites through 2022.

{mosads}“Decisions on areas to include in the 2017-2022 [outer continental shelf] leasing program will have impacts well into the future,” a coalition of 11 industry groups wrote in comments filed to Interior. “Therefore, we believe that BOEM should fully consider all areas for inclusion in the program and keep as many areas as feasible in the draft proposed program.”

The coalition, which includes the American Petroleum Institute, America’s Natural Gas Alliance and the U.S. Oil & Gas Association, said drillers have made great strides since the 2010 disaster at BP’s Macondo well.

“Immediately after the Macondo incident, the U.S. oil and natural gas industry launched a comprehensive review of offshore safety measures and operations to identify potential improvements in spill prevention, intervention, and response capabilities,” they said.

Interior’s Bureau of Ocean Energy Management (BOEM), created in the wake of the Deepwater disaster, now allows drilling only in the western two-thirds of the Gulf of Mexico, Alaska’s Cook Inlet and a few spots off California’s shore. The agency has not banned drilling in the Arctic Ocean, though BOEM is holding off on permits while it considers new rules for operations there.

The Chamber of Commerce said expansive areas should be considered for drilling, including the Atlantic coast, California and all of the Gulf of Mexico. Congress closed the eastern Gulf to drilling after the 2010 disaster, and the business group has said Interior should not exclude any area from consideration.

“Such an action would be premature and given the long lead times necessary for offshore development, could undermine U.S. energy security for decades to come,” the group wrote in a comment letter.

Drilling companies argued in their comments that if Interior excludes any offshore area, the industry would not know the potential oil and gas reserves that could be tapped. Interior has an obligation to keep every possibility open, they said.

“Unless the secretary allows private sector leasing and exploration, the U.S. remains effectively blindfolded as to its true energy potential in the [outer continental shelf], which by the government’s own estimates could be substantial,” wrote Shell Oil Co.

Shell said the Obama administration should pursue “remedial” efforts to make up for years of overly restrictive drilling policies.

Chevron Corp., another major energy producer, said the areas now open to drilling are not sufficient for the nation’s energy needs.

“This country can no longer afford to look to only the federal waters off the coasts of Texas, Louisiana, Mississippi and Alabama to carry the burden of providing such a large portion of the offshore portion of our nation’s energy needs,” the company wrote.

A large coalition of green groups, including Greenpeace, the League of Conservation Voters and the Natural Resources Defense Council, pushed back on the calls for widened drilling access.

The green groups said Interior should not allow new drilling in any of the restricted areas.

“New offshore drilling and leasing in those areas would threaten billion dollar coastal economies, would open fragile and priceless coastal ecosystems to damage from pollution and spills, and would accelerate global climate disruption,” they wrote.

The environmental groups said new drilling would increase the availability of oil and gas, leading to more greenhouse gas emissions, which would go against President Obama’s policies.

“The president’s work fighting climate disruption must extend to include protecting our coasts and beaches from drilling,” the green groups said.

The comments both for and against expanded drilling came in response to a request from Interior in June for public feedback. The agency received at least 235,000 comments, though many were form letters. 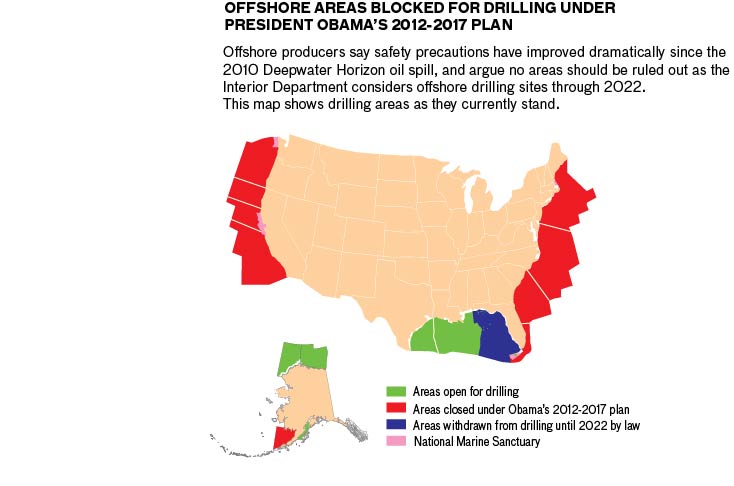 by ANTHONY IZAGUIRRE, Associated Press 1 day ago
Energy & Environment  /  1 day ago
See All