Share Tweet
More
Share
Twitter
Facebook
LinkedIn
Whatsapp
Email
A changing climate poses the greatest economic risks to the red states where voters and the politicians they elect are the least likely to believe in the threat of a warming world, according to a new report.
The report, from the Metropolitan Policy Program at the Brookings Institution, found states like Florida, Georgia, Alabama, Louisiana, Mississippi and Texas face potentially catastrophic losses from hotter summers and stronger storms through the end of the century.
{mosads}At the same time, longer summers — and even more carbon in the atmosphere — are likely to lead to higher crop yields in parts of the Great Plains and the Pacific Northwest.
The costs likely to be borne by those cities and regions in the reddest states will come from a variety of factors.
Cities in Florida and along the Atlantic Coast will bear large costs from rising sea levels, which are already leading to regular flooding in cities like Miami and Charleston.
Industrial Appalachia and parts of the Deep South are likely to see agricultural yields fall because of hotter summers.
Some of the country’s fastest-growing counties in Texas and Florida are likely to see increased mortality rates, according to the Climate Impact Lab, a collaboration of climate scientists and economists from the University of California, Berkeley, the University of Chicago, Rutgers University and the Rhodium Group.
The worst-hit regions are likely to be in Florida. Of the 10 metropolitan areas likely to experience the steepest drops in gross domestic product (GDP), eight — including Tampa, Orlando and Miami — are in the Sunshine State. GDP in those metro areas is likely to fall by 10 percentage points or more. 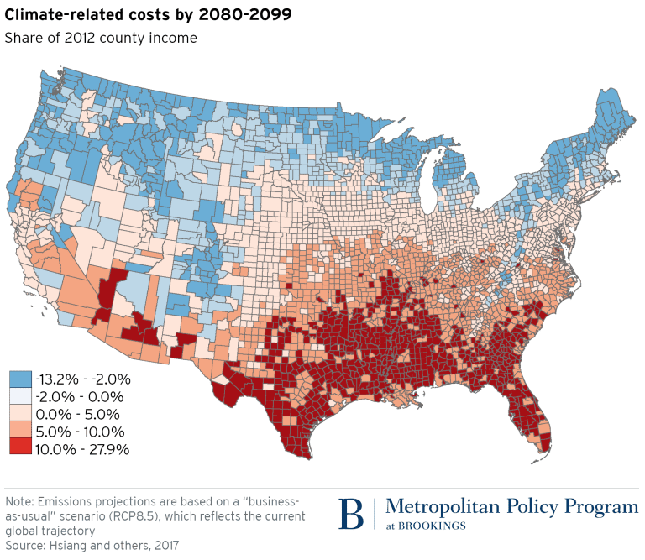 The irony, said Mark Muro, an author of the Brookings report and policy director at the Metropolitan Policy Project, is that those states most in harm’s way are the most reluctant to back aggressive efforts to combat climate change.
“Harm is actually tightly focused on a swath of states and metropolitan areas that are under extreme duress. These places are under a lot of pressure from climate change, but can’t see their way to supporting climate action,” Muro said.
By contrast, the states that have taken the most notable steps to stem carbon emissions are least likely to feel the impacts of climate change — and in some cases, areas in the Mountain West and Pacific Northwest would see an economic benefit thanks to a longer growing season.
Mortality rates would likely decline in parts of the Upper Midwest and the Northeast as harsh winters lose their edge.
Western states like California, Oregon and Washington have taken steps to limit their carbon outputs in recent years. Northeastern states have joined together to create the Regional Greenhouse Gas Initiative to lower their own carbon outputs.
“Bluer states have less directly to lose from climate change and are pursuing a broad, globally aware set of policies,” Muro said. “The whole northern rim of the nation, in pure economic terms, may benefit.”
The threat of climate change’s impact on Southern and Sun Belt states stands in contrast to those states’ economies, which are more likely to be reliant on carbon for growth.
Those states tend to favor Republican presidential candidates who are skeptical of human contributions to a warming world and Republican senators who oppose measures to fight climate change.
After the 2018 midterm elections, the 10 most carbon-reliant states according to the federal Energy Information Administration are represented in the U.S. Senate by 18 Republicans and just two Democrats — Sens. Joe Manchin (D-W.Va.) and Jon Tester (D-Mont.).
On the other end of the spectrum, the ten states that have the least carbon-reliant economies — Delaware, New Jersey, Rhode Island, Oregon, Washington, Maryland, California, Connecticut, Massachusetts and New York — are represented in the Senate entirely by Democrats.
In 2016, the 13 states that emitted the most carbon dioxide per capita all voted for President Trump. Thirteen of the 15 states with the lowest per capita carbon emissions voted for Democratic nominee Hillary Clinton; Trump won both Florida and Idaho, which have some of the lowest per-capita emission rates in the country.
The cost of climate change is also likely to be disproportionately felt by those who live in the country’s poorest regions. The poorest third of the country is likely to see GDP drop by between 2 percent and 20 percent over the rest of the 21st century, the Climate Impact Lab reported.
Tags Donald Trump Hillary Clinton Joe Manchin Jon Tester