The National Oceanic and Atmospheric Administration (NOAA) on Thursday offered a reward up to $38,000 for information leading to a successful arrest in connection with the death of a speared dolphin in Florida.

The NOAA’s Office of Law Enforcement said in a Thursday statement that the bottlenose dolphin was found dead along Upper Captiva Island in Lee County at the end of May.

{mosads}A necropsy report revealed that the dolphin, an adult male known to area biologists, had been impaled in the head with a spear-like object while it was alive.

The object penetrated the dolphin above the right eye, and the wound extended almost 6 inches toward the back of the head, ending at the top of the skull.

The dolphin had last been observed alive swimming around fishing boats and was seen with “begging dolphins,” according to the release.

Harassing, harming, killing or feeding wild dolphins is prohibited under the Marine Mammal Protection Act of 1972. Those convicted face up to $100,000 in fines or up to one year in jail.

NOAA is asking individuals who may have information about the incident to anonymously call the agency’s enforcement hotline at 1-800-853-1964.

The office itself is offering up a $20,000 reward. Several of the agency’s partners, including the Humane Society of the United States and the International Fund for Animal Welfare, have contributed to offer up an additional $18,000.

NOAA said that at least 26 dolphins in the Gulf of Mexico have stranded on beaches with evidence of being shot by guns or arrows or being impaled by some kind of object.

“People can help prevent future harm to wild dolphins by not feeding or attempting to feed them,” the agency said. “Not only is it illegal, dolphins fed by people learn to associate people, boats, and fishing gear with food, which puts dolphins and people in harmful situations.” 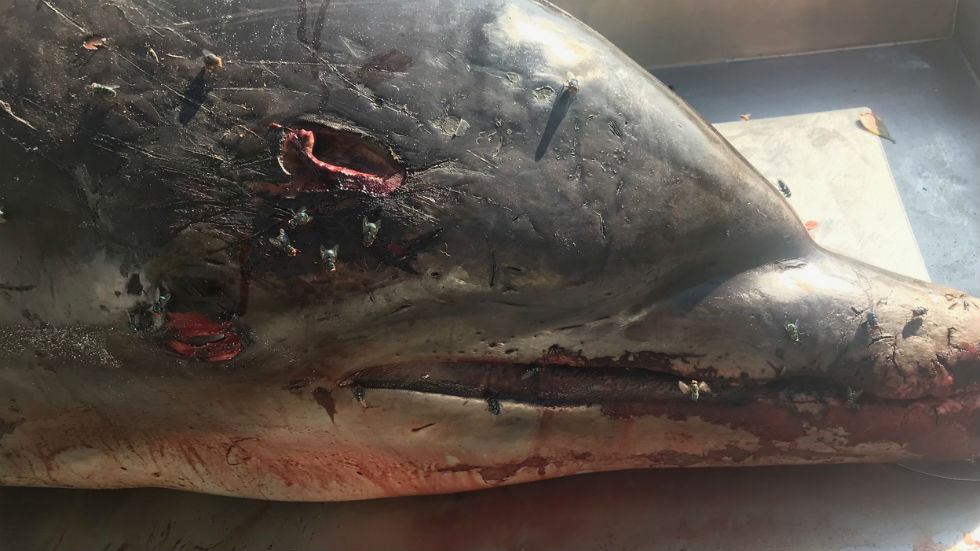