STONINGTON, Maine — Maine’s lobster industry has found itself in something of a climate change sweet spot.

The state’s coastal waters are still cold enough for lobster to thrive, but warming ocean temperatures are now encouraging them to settle here, mate and eventually shed their hard shells.

{mosads}That’s made the past few years some of the best on record for Maine lobstermen.

But those ideal conditions may be short-lived.

“It’s hard to wrap your head around something that has given abundance in the fisheries, that the net effect could be devastation,” said Rep. Chellie Pingree (D-Maine), who lives in Penobscot Bay, home to the state’s most productive lobster territory.

Across the bay from Pingree’s hometown of North Haven sits Stonington, on an island just south of Acadia National Park. The scenery is stunning, but instead of tour boats passing between pine-lined islands, lobster boats dominate the waters.

Fishermen in Stonington bring in more lobster by weight than anywhere else in Maine. In a town with a population of about 1,100, there are at least 400 working boats. 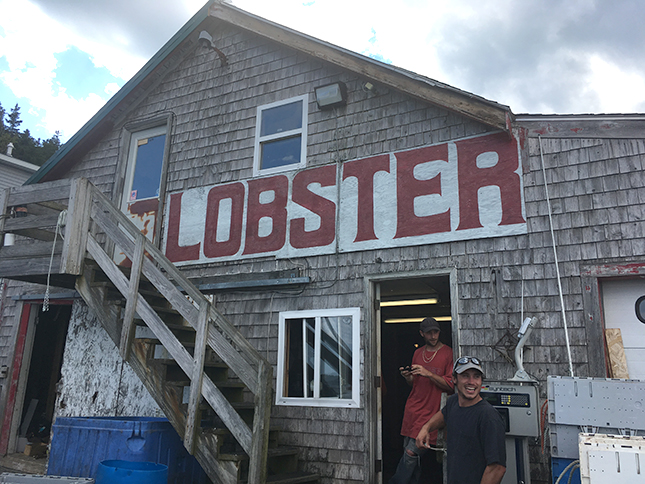 But that ratio also illustrates how this small town, like many others up and down the Maine coast, would be devastated by a collapse of the lobster fishery as water temperatures in the Gulf of Maine rise faster than 99 percent of the world’s oceans.

“It’s not like this island like this can absorb 100 new carpenters,” said Carla Gunther, chief scientist at the Maine Center for Coastal Fisheries in Stonington.

She and other scientists have been closely monitoring the lobster settlement index, which tracks where lobster larvae settle after being carried by ocean currents. One thing that’s become clear: Lobster population centers are slowly moving up the Atlantic Coast toward Canada.

“One has only to look at what has happened in Rhode Island, where the lobster fishery has virtually disappeared, to see the potential threat to Maine,” Sen. Susan Collins (R-Maine) told The Hill.

And the warming waters aren’t just pushing lobsters to settle further northeast. The higher temperatures also provide more favorable conditions for predators of lobster and a shell disease that eats away at a lobster’s protective exoskeleton.

During her campaign, McDonald traveled to islands up and down midcoast Maine in her lobster boat Hello Darlings II, a nod to her twins, to discuss issues affecting the commercial fishing industry.

Many fishermen here say they’re not worried about climate change. Much like the boom-and-bust oil industry, they’re used to having good years and bad years. They expect the industry to tank once every seven years, and they save money to prepare for it.

What they are more worried about right now is whale migrations and the rising cost of bait.

A decline in the herring population has resulted in cuts to how many can be caught and ultimately used for bait. Meanwhile, the National Oceanic and Atmospheric Administration (NOAA) is considering a rule that would require fishermen to reduce the number of lines they have in the water so there are fewer hazards for migrating whales.

Fishermen see those as much bigger problems than climate change, but scientists say they are a result of it.

The dramatic warming of the Gulf of Maine and other bodies of water is changing the ecosystem, impacting the small plankton that are a source of food for both herring and whales. The whales are moving north into new territory, and Maine lobstermen are concerned they may have to decrease their lines to help protect migrating mammals they say they’ve never seen in these parts.

In Washington, Maine’s congressional delegation has been pushing to get more federal funding for research into the warming of the Gulf of Maine, but they’ve been frustrated by the lack of interest by the Trump administration.

“I’d like to see a recognition that this is a problem and we have to get after trying to find solutions,” Sen. Angus King (I-Maine) said of the administration and climate change. “The people closest to the earth see it — the lobsterman, the forester, the people that are out there in the natural environment. They don’t get involved in the debates of who causes it and what it is. They just know.”

Collins agreed, saying there are big and small steps the administration could take.

“I think that the administration needs to do more to first of all recognize the impact of climate change on coastal states,” she said. “I’d like to see the administration be more open to having NOAA play a key role in conducting assessments and assessing the risks that the lobster industry and coastal communities face because of warming water.
“I do find it very frustrating because I’ve seen first hand the changes in Maine,” she added.

Even within the Gulf of Maine, the warming pattern isn’t evenly distributed, leaving southwest Maine most at risk of becoming an undesirable environment for lobster.

Andrew Pershing, chief scientist for the Gulf of Maine Research Institute, said recent studies show changes in the fishing industry could be gradual.

If lobster numbers decline, he said, the figures will likely first return to what was considered normal in the area prior to record-breaking years in 2013 and 2016.

“The difference between old and new lobstermen is that new lobstermen have had nothing but making good money and don’t know what lean years are like,” said Henry Teverow, economic development director for the town of Stonington.

Tammy Hagerthy, of Stonington, has been working on lobster boats since she was a kid. She started on her grandfather’s boat, worked on her husband’s boat and now owns her own, a 26-footer called The Scallywag.

She said she’s not worried about climate change but thinks it might be a problem someday.

{mossecondads}“I feel bad for these young guys because when changes come and the water warms up, they’re not going to be able to afford these bills,” she said, citing payments for boats, gear and vehicles that can total thousands of dollars.

Lobstermen have a few options if the industry undergoes a prolonged downturn. If warming temperatures push lobster further offshore in search of colder water, the boats could follow them. But offshore fishing requires a separate license and oftentimes a larger boat.

They could also switch to fishing other species, though that often requires a significant investment in new equipment.

“I do try to not be all doom and gloom. Fishermen are resilient and we try to be adaptable,” McDonald said. “I think squid are going to be the first emerging fishery that has the population that can sustain commercial fishing pressure.”

Many lobstermen say climate change will likely be a challenge for future generations. But they’re optimistic it won’t mean the end of an industry that has sustained local economies for more than 150 years.

“If anything, it’s going to affect the grandchildren,” Hagerthy said. “But we’re all going to adapt to it. It might be our lobster season 30 years from now comes in January. Those lobster are still going to come, and they’re going to come when the temperature is right.”

‘In it for the long haul’

After Roe: A messy state of play

McConnell moves to center ahead of midterms

Abortion to be ‘major plank’ of Harris’s midterms pitch