STONINGTON, Maine — President Trump is struggling to win over Maine voters with his recent pledge to lift restrictions for the state’s lobster industry.

Trump was beaming when he traveled to the state just two months ago to tell lobstermen he was reversing protections for some 5,000 miles of ocean territory in a bid to open it to fishing.

“You’re going to go fishing in that area now that you haven’t seen for a long time,” Trump said at a roundtable with representatives from Maine’s fishing industry. “Lobstermen and seafood producers, I want to just congratulate you.”

But the state’s lobstermen aren’t celebrating. That’s because the area Trump aims to reopen is 130 miles southeast of Cape Cod — far beyond the reach of Maine’s day-boat lobstermen.

“This doesn’t help the Maine fisherman at all,” Leroy Weed, 79, who has had a lobster license since he was 10 years old, said of Trump’s reversal of protections for the Northeast Canyons and Seamounts Marine National Monument off of Cape Cod.

“There isn’t a boat in this harbor worth $2 million that could go out there and compete,” Weed said, pointing out to Stonington’s horseshoe-shaped cove, home to the state’s most productive lobster port.

Most of Maine’s lobstering takes place within three miles of shore, and even those with a federal license don’t typically travel more than 30 miles offshore.

Trump’s pronouncement in June marked his latest overture to an industry that has been hit hard by tariffs in his trade war with China.

As November nears — and as polls show presumptive Democratic nominee Joe Biden with a double-digit lead over Trump in Maine — Trump has floated a number of proposals, including financial aid for the lobster industry, to undo what he says was damage done by former President Obama.

But Maine lobster hauls steadily increased during the Obama administration. The real turmoil for the industry came in 2018, when the Chinese market vanished under a 35 percent tariff on lobster.

Tom Adams, a lobster wholesaler who founded Maine Coast, recalled when he first heard about the tariffs.

“I read that news, and when my wife got home later that evening, I told her about the tariffs and how it could potentially impact the Maine coast and our family and I spent a weekend kind of feeling bad for myself,” Adams told The Hill. 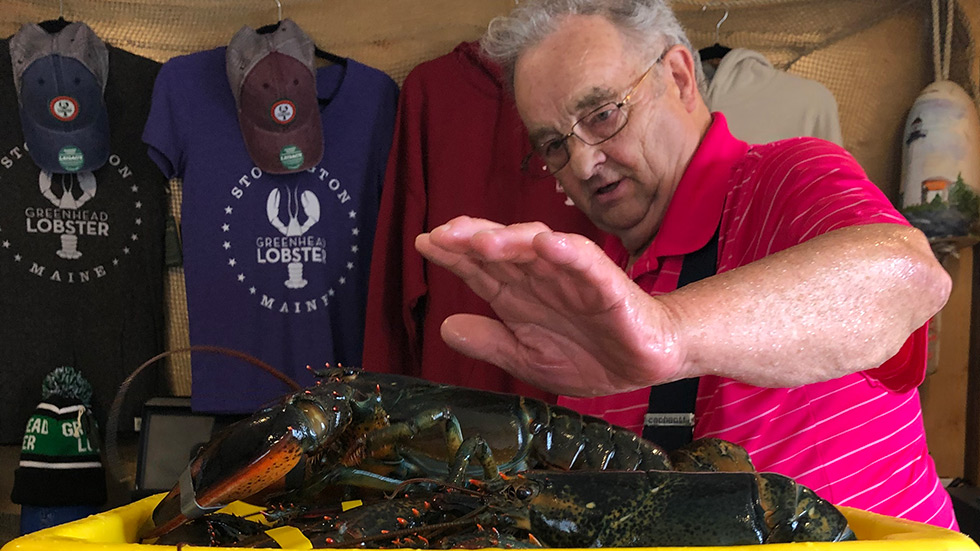 Adams was heavily invested in China at the time — his sales there dropped 80 percent — and said his company worked hard to find new markets so their sales wouldn’t plummet, a challenge he still faces today.

“It’s remained a struggle in that sense to get ourselves sorted,” he said.

Shortly after Trump’s June visit, the White House announced it would offer lobstermen the same type of aid the Department of Agriculture (USDA) gave to Midwest farmers as the Chinese markets for corn, soybean and pork collapsed during the trade war.

But it’s not clear who would get the aid or when it will arrive.

“Neither I nor my staff have received an update on USDA’s plans to provide direct relief to the lobster industry,” Sen. Angus King (I-Maine) wrote to Agriculture Secretary Sonny Perdue last month, asking the agency to reach out to both the Maine delegation and industry leaders.

“These are issues that have been problematic for quite a while,” she said. “I’m sure in his mind appealing to the lobstermen was, you know, showing concern for working people and an important industry in our state, but I don’t think it’s a positive thing to do if you’re just making empty promises, particularly for an industry that has a lot of reasons to be worried.”

One of those reasons is COVID-19. Some of the largest markets for lobster — cruise ships and restaurants — have shut down because of the outbreak.

“At this time when the lobster industry is struggling and the domestic market remains paralyzed by COVID, it would be helpful to have a thriving international market,” said Genevieve McDonald, the Democratic state representative from Stonington and herself a lobster boat captain.

Trump’s main solution for the industry has been more fishing, arguing that marine protections, not tariffs, have reduced lobstermen’s income.

The president has argued that lobstermen’s income was reduced not by tariffs but by Obama’s designation of the Northeast Canyons and Seamounts Marine National Monument off Cape Cod.

“They took away your livelihood. It’s ridiculous,” he said while reversing the protections.

However, the Obama-era restrictions on lobstering in the area aren’t slated to take effect until 2023.

The price lobstermen are paid for their catch has dropped under the tariffs, but the bigger fear for the industry is that prices this season might drop to levels that prevent fishermen from keeping up with payments on boats and equipment.

Lobstermen argue that if Trump wanted to help the industry, he would have focused on loosening protections for the North Atlantic right whale that restrict the amount of line used for lobster traps in order to reduce deadly entanglements.

The topic was discussed during Trump’s visit, but only briefly.

“I just want to, as a lobsterman, bring up something that I would be run out of town if I didn’t bring up to you,” Kristan Porter, president of the Maine Lobstermen’s Association, said at the roundtable. “We find our industry at risk of being shut down because of the endangered right whale.”

Trump pledged to consider easing the regulations so long as they could still protect the whales, which he at one point referred to as the “white whale.” No announcements have been made by the administration since then.

While Trump has his critics in Maine, some said his visit may prove worthwhile come Election Day.

“He did come here and talk about lobster in a hangar in Bangor International Airport,” MacDonald said. “He did raise some awareness about our plight.”

There are roughly 5,000 lobster licenses in Maine, and the industry supports at least another 10,000 jobs in the state. Former Secretary of State Hillary Clinton beat Trump in Maine by about 22,000 votes in 2016.

“There’s something romantic about fishing and farming for a living that the general public seems to support,” Adams said.

“So do I think it can sway votes, showing support for fishermen and their families and all the supply that can go along with that? Yeah, I think that can have a big impact in Maine.”