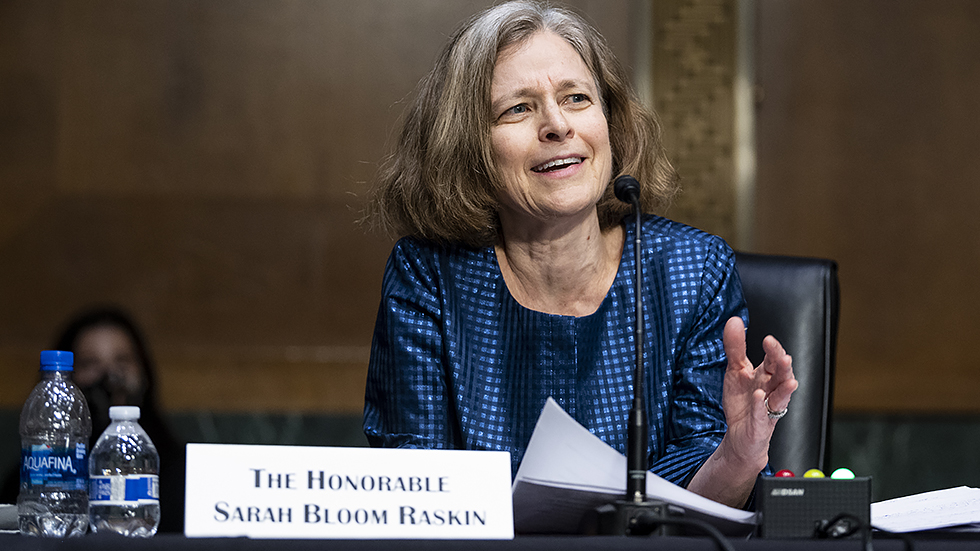 Sen. Joe Manchin (D-W.Va.) said Monday that he will not vote to confirm President Biden‘s pick for a powerful position on the Federal Reserve Board over her criticism of the fossil fuel industry.

In a Monday statement, Manchin said he opposes Biden’s nomination of Sarah Bloom Raskin to serve as the Fed’s vice chair of supervision because of his “concerns about the critical importance of financing an all-of-the-above energy policy to meet our nation’s critical energy needs.”

The story so far: Raskin, a former Fed governor and Treasury Department deputy secretary, urged financial regulators and banks to pay closer attention to climate-related financial risks for years before Biden chose her to be the Fed’s regulatory chief. She had also warned against making investments in fossil fuel projects and companies, noting the environmental risks and financial volatility within the sector, and opposed the Fed giving emergency loans to fossil fuel companies during the height of the coronavirus pandemic.

While Raskin said throughout her confirmation hearing that she would not use the Fed to steer funding away from oil and gas production, Manchin said the views on energy-related financial matters will cost her his support.

“Now more than ever, the United States must have policy leaders and economic experts who are focused on the most pressing issues facing the American people and our nation – specifically rising inflation and energy costs,” Manchin said.

“The time has come for the Federal Reserve Board to return to its defining principles and dual mandate of controlling inflation by ensuring stable prices and maximum employment. I will not support any future nominee that does not respect these critical priorities.”

And what else? Without Manchin’s vote, Raskin would need the support of at least one Republican senator to be confirmed by the upper chamber. Democrats narrowly control the Senate with 50 members plus the tiebreaking vote of Vice President Harris. Manchin’s opposition will also bolster a Senate GOP blockade of Raskin’s nomination on the Senate Banking Committee, which has snarled her and four other Fed nominations.

In a Monday statement, White House called Raskin “one of the most qualified people to have ever been nominated” to the Fed and said they were still working to get her confirmed despite Manchin’s opposition.

“She has earned widespread support in the face of an unprecedented, baseless campaign led by oil and gas companies that sought to tarnish her distinguished career.  We are working to line up the bipartisan support that she deserves, so that she can be confirmed by the Senate for this important position,” said deputy Biden press secretary Chris Meagher in a statement.

Even so, Raskin is likely facing insurmountable obstacles at every level of the confirmation process. 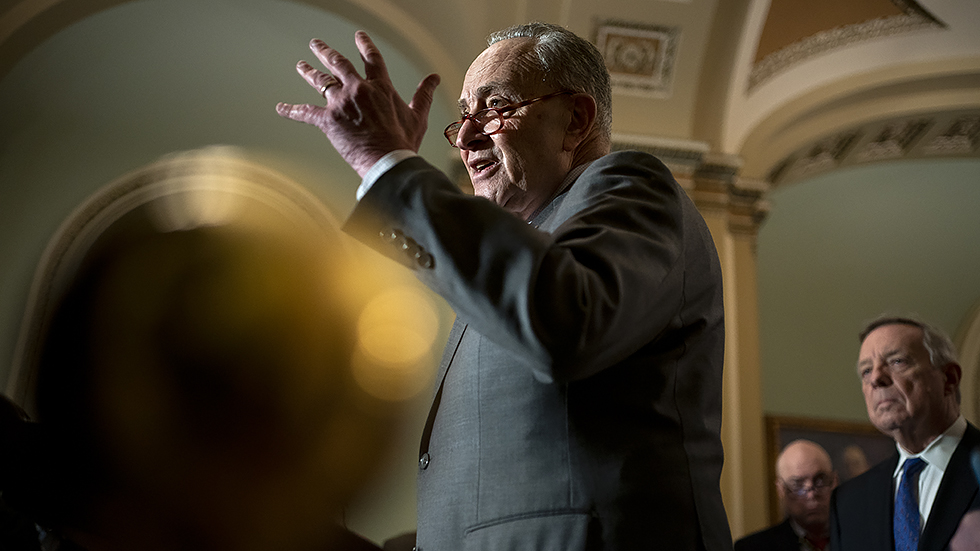 Progressives are hoping to turn the heat up on Majority Leader Charles Schumer (D-N.Y.) in an effort to push climate action across the congressional finish line.

But progressive groups see Manchin’s comments in recent weeks as signaling an openness to spending on climate issues and are pushing leadership to bring the issue to the forefront.

“In his own words, Majority Leader Chuck Schumer promised the Senate will ‘forcefully, insistently, and urgently’ address climate as the greatest threat to our country. But after more than a year of Democratic control in Washington, he still has yet to deliver,” Evergreen Action Executive Director Jamal Raad said in a statement that was first shared with The Hill.

The group is also releasing a video on Monday, shared first with The Hill, that calls on Schumer to “deliver.”

What’s next? Several local climate groups said they would demonstrate outside of Schumer’s house on Monday.

“It’s your job as the leader of your party to manage those relationships and to broker those deals,” Hu said.

“His inaction and his inability to do his job properly is not just costing us this piece of legislation … it’s literally costing us our future,” she added.

Manchin earlier this month pitched a scaled-down bill that would include spending priorities for Democrats, possibly including climate change.

“Half of that money should be dedicated to fighting inflation and reducing the deficit,” he said. “The other half you can pick for a 10-year program, whatever you think is the highest priority and right now it seems to be the environment.”

The Senate has been focused for the last several weeks on other issues, including Russia’s war in Ukraine and the government funding bill.

Schumer recently alluded to the social and climate spending agenda, which would need to pass the Senate with a simple majority vote in a process called reconciliation, in a “Dear Colleague” letter.

Leaps in digitalization refine the way we live, learn and work. At the center of these transformations are high-powered networks that make connectivity and data optimization possible. Join The Hill’s Steve Clemons for conversations with Sen. Deb Fischer (R-Neb.), Rep. Robin Kelly (D-Ill.), Rep. Grace Meng (D-N.Y.) and more on the role of networks in creating a more sustainable, equitable and livable tomorrow. RSVP here. Virtual Event Invitation—The Future of Education—Thursday, March 17 at 1:00 PM ET/10:00 AM PT

The worst of price increases is not over 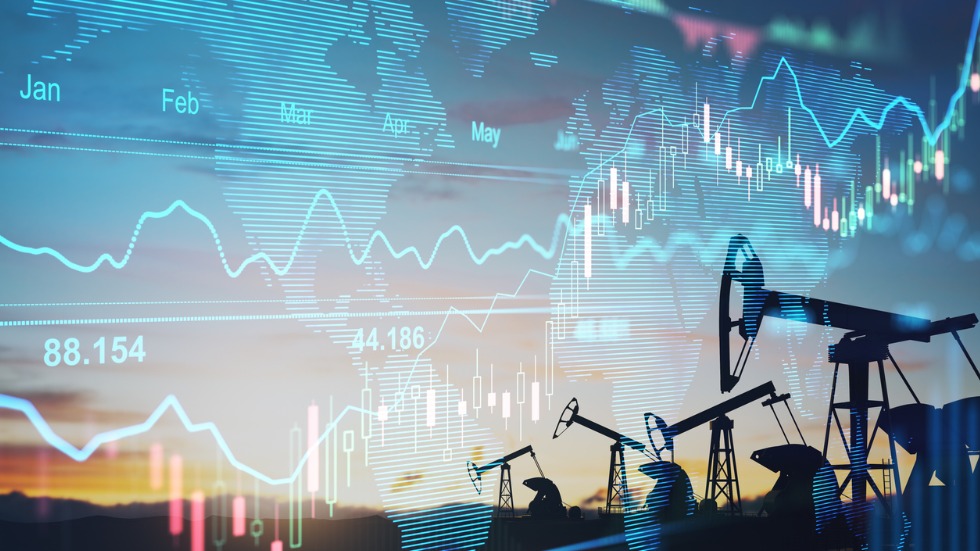 It would likely be “too optimistic” to assume energy prices have hit their peak amid the ongoing conflict in Ukraine, the executive director of the International Energy Agency said Monday.

“I think [whether] the worst is over or not will be depending on A, what will be the next steps of Russia continuing with the aggression or not, politically and also in the energy sector,” Fatih Birol told The Washington Post’s Heather Long on Monday.

“Russia is not [just] any country when it comes to energy. Russia is today the top oil exporter of the world and the top natural gas exporter of the world, and as such, the aggression of Russia and the decision taken by the international community to ban or reduce the Russian energy imports do have major implications for the energy balances,” he added. “And I think it would be too optimistic to say that the worst is over where we stand today.”

However, Birol also expressed hope that world powers could eventually emerge from the crisis with a more innovative energy strategy, noting that “when you look at the countries … they responded to the 1970s [gas crisis] with more innovation in the energy technologies, ranging from nuclear power becoming a part of the global energy scene to pushing the energy efficiency, car efficiency, fuel efficiency.”

“So I am also hopeful that at the end of this crisis, the first global energy crisis, countries not just states — Europe, Japan, emerging countries — will come up with new energy policies accelerating the clean energy transition,” he said. “As such, it can be a historical turning point in global energy policymaking.”

And finally, something offbeat and off-beat: Chi-kovsky