The Jersey Shore is getting a facelift — with up to 98 turbines set to dot the boardwalk backdrop as Atlantic City revelers sample saltwater taffy and powdery funnel cake.

A Danish-developed wind farm will be connecting to the U.S. grid through a coal plant decommissioned in 2020, according to Bloomberg Green.

“Anytime you can repurpose existing infrastructure, it makes it easier to get permitting,” Tyson Slocum of advocacy group Public Citizen told Bloomberg.

Today we’re looking at the problem of live coal plants — and how they are blocking an international climate deal among the world’s wealthiest nations. And across the North American continent, we’re seeing the impacts of the West coast’s fires — and how the resultant air pollution is taking a toll on our health.

Ministers from the world’s wealthiest nations are at loggerheads over the future of coal as well as how to get the planet to net-zero emissions by 2050, at this week’s Group of 20 (G-20) Ministerial Meeting on Environment, Climate and Energy.

With fewer than 100 days until the worldwide COP26 U.N. Climate Change Conference in Glasgow, and the U.K. and developing nations demanding that wealthy countries cut emissions faster, the failure to make a deal here means urgent work for national governments.

First steps: Success at the G-20 would be “a tell-tale for the dynamic now, as we head to the U.N. General Assembly [in September],” U.S. climate envoy John Kerry told Miles Johnson and Leslie Hook of the Financial Times.

Kerry said President Biden was “trying to figure out” how to increase climate finance contributions to poorer countries, and that he hoped to see commitments from member nations to reduce emissions.

But it now seems unlikely that G-20 ministers will agree to end coal — or even on the need to keep the global temperature rise under 1.5 celsius, Bloomberg Green reported.

A clamor for coal: “Two developed economies are pushing back against new commitments on coal,” Bloomberg noted. The two countries were not named, but the split points to wider divisions around the use of coal.

Japan is considering funding a new coal plant in Bangladesh, though support in both countries is waning, Benjamin Parkin reported for the Financial Times. This is the kind of funding abroad that the more exclusive Group of Seven came out against in June, directed toward one of the world’s most climate-vulnerable countries.

Meanwhile in Australia, the coal industry is booming, as flooding in the Indonesian coal fields and high demand in Asia raises global coal prices to their highest in 12 years, Neil Hume reported for the Financial Times.

A row over the reef: Carbon dioxide from emissions also makes oceans warmer and more acidic, driving the coral bleaching that, according to UNESCO, is killing the 1,500-mile Great Barrier Reef, as we reported in June.

After that announcement — which local environmentalists seized on to push for coal reduction —  Australia launched a “frenzied lobbying campaign,” including snorkeling trips to the reef, to convince most members of the World Heritage Committee to postpone adding the reef to UNESCO’s “in danger” list, as Jamie Smyth reported for the Financial Times.

That effort won over a majority of the committee, Robert Hart reported for Forbes.

In G-20 member Brazil, the carbon they can’t quit burning comes from trees. A Nature study last week showed that the Amazon rainforest, which traditionally has pulled carbon from the atmosphere, has begun to emit it, Damian Carrington reported for The Guardian.

Despite promises by President Jair Bolsonaro in April to stop deforestation, levels have risen for three straight months, Jake Spring reported for Reuters in June. Fires from expanding — but legal — soy plantations continue to clear Amazon disputed forestlands, in what one activist called “a crime by the state,” Ana Ionova reported Wednesday for Mongabay.

Takeaway: Back in Italy, the G-20 only agreed to a tepid rejection of “unabated coal” (that is, untreated emissions) and a recommendation that members follow the G-7 on moving away from overseas coal financing, without any Australia-angering commitments about ending domestic coal.

It’s “a stark warning for COP26,” one London researcher told Bloomberg Green. The success of the November conference, he said, now relies on “leaders stepping up where ministers have failed.” 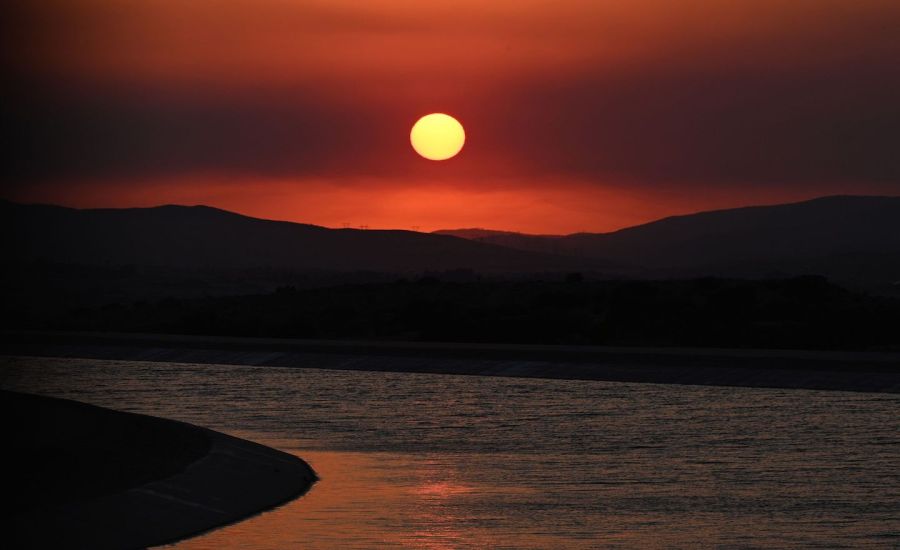 The wildfire smoke billowing across America has become so pervasive that its effects may reach outer space — possibly turning the full moon red this weekend.

“The moon usually turns orange or red during an eclipse, but this time, instead of being eclipsed by Earth’s shadow, the moon will be eclipsed by thick layers of smoke,” according to a Veuer video report on USA Today.

Oregon’s ferocious Bootleg blaze has become what CNN’s Ivana Kottasová described as “a monstrous complex with its own weather, sending the dense smoke some 3,000 miles across one end of the continent to the other” — rousing New York with “an intense red sunrise” on Wednesday. The Siberian town of Yakutsk, the world’s coldest city, is likewise “blanketed in haze as nearby wildfires tear through forests,” with smoke traveling as far as Alaska, Kottasová reported.

Fires fueled by universal drought: While recent summers have been hot and dry, this summer is hotter and drier than ever. That has generated ideal fuel for fire.

By one measure — the Palmer Drought Severity Index — almost 100 percent of the Western U.S. is now encountering drought, setting a 122-year record, Tom Yulsman reported for Discover, citing climatologist David Simeral. Another metric, the U.S. Drought Monitor, shows about 90 percent of the West experiencing some level of drought.

It’s not just climate change: While the worst of this year’s American wildfires are thus far blazing in the Pacific Northwest, Southern California has also gained a reputation for its ferocious ignition potential.

But in that region, a U.S.-Canadian team of researchers have identified that fall and winter fires can be attributed to Santa Ana winds and infrastructural failures — and not, apparently, due to rising temperatures, Phys.org reported.

While Californian summer fires are usually triggered by lightning in remote locations, fall and winter fires “are almost always ignited by humans via arson and power line failures.”

Regardless of the trigger, people are suffering: With smoke wafting over North America, communities are suffering from the health effects of air pollution exposure.

The Environmental Protection Agency (EPA) will mandate smog reduction plans for parts of California and Colorado in response to a lawsuit filed by environmental groups, the Center for Biological Diversity reported. Smog violations create up to 390,000 more asthma attacks in children each year, the center warned.

Excess ground-level ozone, the main component of smog, exacerbates other environmental risks — including the potential for forest fires, like those ravaging the West today.

Equipping consumers with air pollution data: Residents at the very least can now access real-time air pollution data at their fingertips — from fires and other sources. Since December, monitoring data from the BreezoMeter app has been automatically integrated into smartphone weather apps, including those from Apple, Yahoo, WeatherBug and others.

BreezoMeter was the 2014 brainchild of three Israeli entrepreneurs, who launched their app with $200,000 of seed funding as an Android platform that initially functioned in Israel only, as Sharon reported at the time for The Jerusalem Post.

Takeaway: With air pollution data now available on weather apps, consumers can change plans due to poor air quality forecasts, while hospitals can predict increased admissions during pollution events, Walsh said. In this changing climate, he added, air pollution remains both a hyper-local problem as well as a national issue, as massive mega-fires blanket the U.S.

“Air quality is a silent killer,” Walsh said. “I hope that we are educating people to the extent that they will take action.” 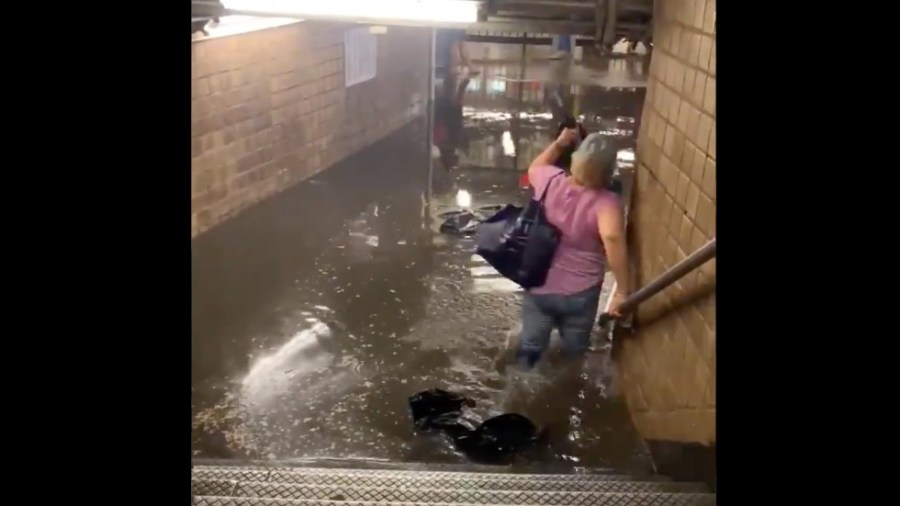 Additional progress on PFAS in Senate committee, and in California

{mosads}Next week, we find out if Senate members can meet their self-imposed deadline Monday to start debating the infrastructure bill — which, as Alexander Bolton noted for The Hill, isn’t looking good.

Please visit The Hill’s sustainability section online for the web version of this newsletter and more stories. Have a lovely weekend, and we will see you again on Monday.

How automakers are leaning on dealerships in electric vehicle charging race