Tara Houska attended her first anti-pipeline demonstration in 2014, against the since-defeated Keystone XL.

The experience, says the cofounder of the indigenous environmental activist group Giniw Collective, taught her that “public and political pressure in moving an issue is so deeply important towards success.”

Now, helping to lead opposition to the Line 3 pipeline extension in Minnesota, Houska says she’s become a firm believer in a “holistic approach to land protection.”

“I’ve also become more firm in my position that as the holders of the last remaining biodiversity on planet Earth, the need to center and uphold tribal sovereignty and indigenous rights, specifically indigenous land rights, is absolutely critical towards any sort of solution there could be involving climate,” she told The Hill in a phone interview from the frontlines of the protests.

A citizen of the Couchiching First Nation, Houska has worn a number of hats, including serving as an adviser to Sen. Bernie Sanders (I-Vt.) on Native American affairs.

Before cofounding the Giniw Collective in 2018, she worked as a lawyer and lobbyist on Capitol Hill for various tribal nations. The experience, she said, introduced her to the sheer breadth of issues on which indigenous people fight to make their voices heard.

Houska says she saw firsthand “the process of administrative, regulatory oversight, legislative efforts at reform and all the different mechanisms present in the legal system to uphold tribal sovereignty and protect our land.”

The protection of the land in particular hit close to home, she said, because it “is our identity… we are people of the land, the land is us.”

In 2016, she heard calls for help over the Dakota Access Pipeline from residents of the Standing Rock Reservation, transmitted through the then-brand-new Facebook Live streaming feature.

“I had been organizing for a bit at that point, putting together demonstrations and petitions and doing all the work that is oftentimes associated with advocacy, but I saw a person that looked like they were going to really taking a stand,” Houska said, adding that she was particularly inspired by the indigenous “youth runners,” activists who ran the 2,000 miles from Cannon Ball, N.D., to Washington in protest.

“That just touched my heart and made me see a different path to change,” she said. “And so I packed up everything I had in a rental car and went out to North Dakota, not really knowing where I was going or how long I was going to be there. I thought maybe I was going to be there for a couple weeks, [but] stayed for six months and really have not left that method of advocating.”

Since Houska shifted her focus to pipeline activism, the Keystone XL has been cancelled by the Biden administration.

The Dakota Access Pipeline, the subject of multiple legal challenges, remains in operation, but a federal judge has ordered the Army Corps of Engineers to conduct a full Environmental Impact Statement after finding it erred by failing to do so before construction. 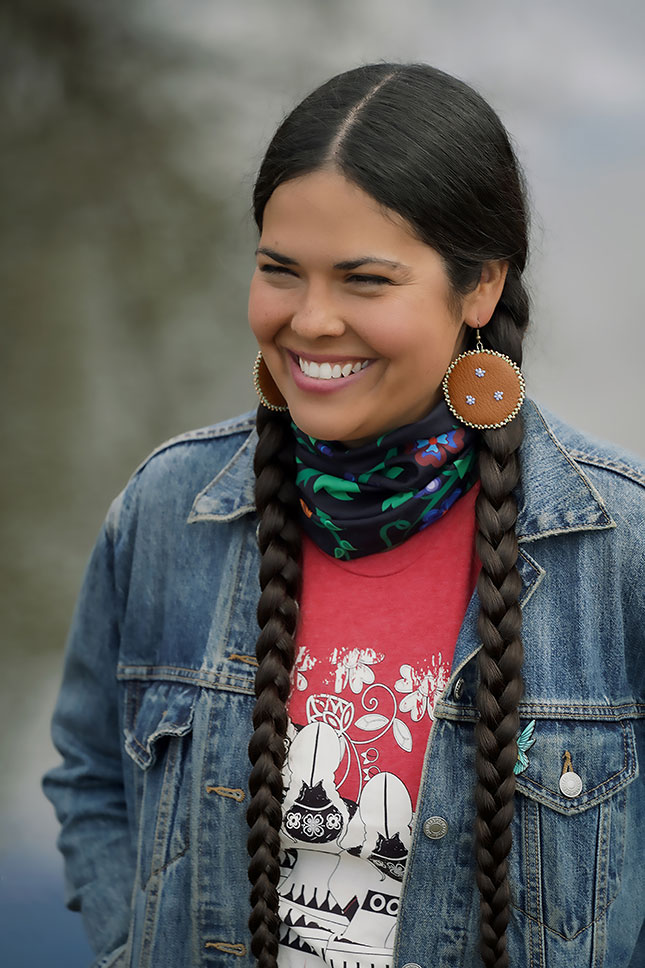 Houska said that so far she’s been pleased with some of the Biden administration’s actions on environmental issues, such as the cancellation of Keystone XL and of oil leases in the Arctic, but disappointed on others. That “mixed bag,” she said, is unacceptable given the gravity of the situation.

Houska currently focuses much of her attention on Enbridge’s Line 3 pipeline extension, which would carry tar sands oil through Minnesota from Canada.

In June, more than 200 activists were arrested attempting to block access to a pumping station at the site. Houska herself was arrested in March on trespassing charges with six other activists after they erected and sat in a waaginogaaning, a traditional domed structure used for prayer, on the site.

The Justice Department has defended the Trump-era permitting behind Line 3, saying in a court filing last month that the Army Corps of Engineers “met its … obligations by preparing Environmental Assessments (EA), which included consideration of the impacts from the Corps’ authorizations, including to wetlands, the climate, low-income and minority populations, Tribal rights to hunt, fish, and gather, and all of the issues to which Plaintiffs draw special attention.”

A Minnesota appeals court in June upheld the issuance of a certificate of need for the pipeline segment, saying regulators “reasonably selected a route for the replacement pipeline based upon respect for tribal sovereignty, while minimizing environmental impact.”

The company projects the segment will be completed by the fourth quarter of this year.

Enbridge has rejected charges that Line 3 will pose a hazard to the local environment. After a letter was circulated by celebrities including Mark Ruffalo, Jane Fonda and Danny Glover opposing the project, spokesperson Juli Kellner said it “ignores the fact that the Minnesota Public Utilities Commission addressed climate change in their decision granting Line 3 its Certificate of Need. They concluded that emissions from the ultimate consumption of oil transported on Line 3 do not result from the replaced pipeline, but instead from the continued demand for crude oil to produce refined products used by consumers.”

Although Line 3 is her current focus, Houska said, the struggles over the other two pipelines have informed her approach to activism as a whole.

Battles over pipelines, she said, are representative of larger tribal environmental struggles, but are a particularly salient issue because of “the immediate … localized harms of both spills and degradation to ecosystems through the construction, and harms to the people in the communities by way of manned camps and the influx of out-of-state workers into an area.”

They can also have the added effect of contributing to the tangle of conflicting criminal jurisdictions that tribal leaders and reservation residents must frequently deal with, Houska said.

“There’s those pieces, but it’s also about a larger understanding of stopping it at the source and forcing the industry and, on a broader scale, society, into recognizing that we cannot continue to expand the fossil fuel industry in the face of climate crisis,” she said.

Pipelines are often the staging ground for these fights in microcosm because they serve as “a symbol of the problem, which is endless expansion as a model of growth,” she said.

Houska added that the kind of direct-action activism tactics she has come to focus on “tends to be one of the most underfunded, undervalued pieces of the climate movement because it’s one of the most uncomfortable.”

“It requires selflessness and real risk, but it’s also one of the ones that’s met with the most egregious and militarized response, out of any other form of advocacy,” she said.