Today is Monday.  Welcome to Equilibrium, a newsletter that tracks the growing global battle over the future of sustainability. Subscribe here: thehill.com/newsletter-signup.

A devastating earthquake that killed at least 1,300 people in southwestern Haiti this weekend has left thousands more injured — and with minimal access to the medical services they need.

“I’m the only surgeon over there,” Dr. Edward Destine, an orthopedic surgeon, told The New York Times. “I would like to operate on 10 people today, but I just don’t have the supplies.”

On an island that is still recovering from a 2010 quake that killed about a quarter-million people and a 2016 hurricane that killed at least 400, residents are clambering to coordinate an organized response to Saturday’s 7.2-magnitude tremor — while still reeling from the recent assassination of Haitian president Jovenel Moïse. And just a “handful of doctors” were able to erect makeshift triage wards in a region of Haiti that is home to a million people, the Times reported.

Today we’ll take a look at why Haiti is so prone to earthquakes and how the country’s disaster recovery has evolved in the wake of past mistakes. And new projections suggest the auto industry foresees a renaissance of SUVs and trucks — which could threaten the Biden administration’s climate ambitions.

Residents of southwestern Haiti scrambled to find temporary shelters and potable water after a major earthquake shook their region — just as hurricane season heads in the island’s direction.

Heavy rains were falling on the island on Monday as Tropical Depression Grace neared Haiti’s coast, generating additional concern that mud could further destabilize buildings and hamper rescue efforts, The Miami Herald reported. On Sunday, foreign assistance from the U.S., the U.N. and others had started to arrive, including a U.S. Agency for International Development search and rescue team that brought 52,000 pounds of tools and medical supplies, according to the Herald.

Why is Haiti so prone to tremors? Haiti sits at the intersection of the North American and the Caribbean tectonic plates, which can cause earthquakes by moving against each other and generating friction, The Associated Press reported.

Many fault lines between those two plates cut through the island of Hispaniola, which Haiti and the Dominican Republic share, and “where plates transition from smashing together to sliding past one another,” Rich Briggs of the U.S. Geological Survey’s Geologic Hazards Science Center told the AP.

“It’s like a rock stuck in the track of a sliding glass door,” he said. “It just does not want to move smoothly because it’s got so many different forces on it.”

This weekend’s earthquake likely occurred along a fault zone that runs through Haiti’s southwestern Tiburon Peninsula, the AP explained, citing USGS. This is the same zone along which the 2010 quake occurred.

Population density; shaky infrastructure: Exacerbating such hazardous seismic conditions is Haiti’s population density: 11 million people, living in buildings that are better equipped to withstand hurricanes than earthquakes, according to the AP.

While concrete and cinder blocks can survive winds, they can still collapse when the ground is shaking, the AP report said.

Although the weekend’s 7.2-magnitude quake was stronger than the 7.0-magnitude event in 2010, it was far less lethal, as the 2010 quake struck closer to the densely populated capital city of Port-au-Prince, causing more widespread devastation.

“Night and day” since 2010: Prime Minister Ariel Henry pledged at a Sunday news conference “to give a more appropriate response than the one we gave in 2010,” in which a single operation center in Port-au-Prince was operating to coordinate aid efforts, according to the Times.

Dr. Paul Farmer, co-founder of Partners in Health, a relief agency that governs several hospitals in Haiti, confirmed that the island’s earthquake response capabilities had improved in the years since the previous quake.

“The things we had at our disposal in 2010 versus now are night and day,” he told the Times, though he acknowledged that the relief effort is still up against poor infrastructure, political volatility and gang violence.

In fact, emergency response was all the more difficult because four regions affected by the earthquake were cut off by armed gang warfare at the southern entrance of Port-au-Prince, according to the Herald.

Learning from past mistakes: In an attempt to curb chaos in the ongoing relief effort, Henry issued an order directing all donations to be delivered to Haiti’s government for coordinated distribution, the Herald reported. The goal, Henry explained, is to prevent mismanagement that occurred after Hurricane Matthew in 2016, when some communities received the brunt of the donations and others were ignored — leading to outbreaks of violence.

By adopting such a streamlined aid acceptance system, Henry said he hopes to avoid significant waste and losses, the Herald reported. In addition, he sought to discourage NGOs and charities from “bringing things that we do not need” and distributing aid how they see fit.

“We are making sure that it passes through one door of entry,” Henry said, according to the Herald.

Takeaway: The situation in Haiti illustrates a key risk factor identified by last week’s dire report issued by the U.N.’s Intergovernmental Panel on Climate Change: the problem of compounding events, in which multiple and acute crises occur in parallel — a political assassination, an earthquake and a tropical storm, coupled with long-running poverty and gang warfare. 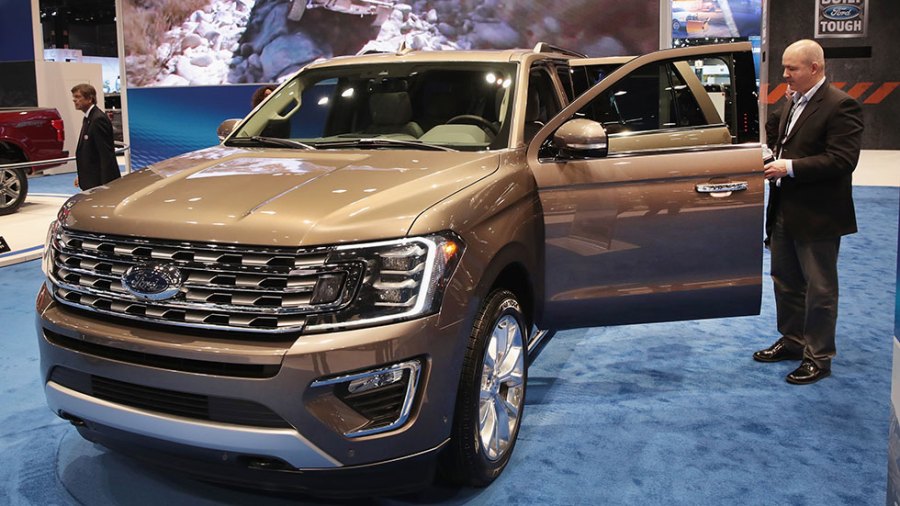 America’s major automakers plan to keep pushing out gas-guzzling SUVs and pickups, — raising questions about their “lofty 2030 goals” for boosting electric car sales, according to Reuters.

Step one: The Big Three automakers — Ford, General Motors and Stellantis N.V. — announced on Aug. 5 their “shared aspiration” to get electric vehicle sales up above 40 percent of production by 2030.

At that rate, automakers will have to double production between 2028 and 2030 in order to hit even the “low-end target of 40 percent,” according to Reuters.

Meanwhile, SUV numbers are booming: North American automakers plan to turn out 3.3 million full-size pickups and SUVs in 2021, according to AutoForecast Solutions. The firm expects that number to climb to 3.75 million by 2028 — 20 percent more than that year’s projected electric vehicle production.

A gasoline-powered pickup emits twice as much carbon over its full lifecycle as an electric car, Reuters reported.

The high SUV sales can be seen as a reflection of consumer choice — except that consumers don’t have much choice, as innovation policy expert Ashley Nunes told The Sacramento Bee.

There are far fewer electric vehicles than gas-powered models, and they tend to be more expensive. Half of electric vehicle sales last year were Tesla Model 3s, which costs “almost twice as much as the average small car in 2021,” according to the Bee. Nonetheless, a 2020 Consumer Reports study found that “battery-powered car owners” could save up to $10,000 over the lifetime of their car.

The auto industry has emphasized that its ability to meet sales targets is “dependent on consumer demand and government subsidies,” according to Reuters.

Oil is back: Warnings last week about the need to get off fossil fuels were dire in the wake of the U.N.’s latest Intergovernmental Panel on Climate Change report. But “investors, for the most part, are not buying into the sky is falling climate change narrative,” portfolio manager Martin Pelletier told Bloomberg Green.

The transition to electric is coming, he said, but how fast “is what’s under question.” For now, oil is high: Oil and gas energy stocks are up 30 percent this year, above even tech stocks, Bloomberg Green reported.

Unintended consequences: A big part of that rise is lack of supply, portfolio manager Ryan Bushell told Bloomberg Green, which comes from years of declining rates of investment in fossil fuel infrastructure, like new wells and building pipelines.

That decline is in keeping with the International Energy Agency’s urgent May warning to cease new oil and gas development, as The Hill reported.

But that slow ebb in supply will interact (at least short-term) with a projected surge in fossil fuel demand as world nations try to boost their economies after the coronavirus.

Last words: The current projections represent the market’s best guess as to what will make money over the next decade.

A not-so-relaxing trip to sunlit shores that will have you glad you’re staying home — unless, of course, you find yourself in the Pacific Northwest, Western Canada or Siberia.

Wildfire rages outside of Jerusalem; Mediterranean region continues to burn

Recovering from fires, Turkey is battered by floods

In the spirit of fires, floods and drought, the Bureau of Reclamation declared the Colorado River’s first-ever federal shortage this afternoon. This decision will result in hefty water usage cuts in 2022 — which can be expected to impact agriculture in the Southwest.

House Democrats want to use DPA for electric transformers, seek $2.1B in funding

Trump complicates GOP position as party of the Constitution