How China impacts US gas prices

China’s coronavirus outbreak is having a big impact on global oil prices, highlighting how Beijing’s decisions can affect gas prices in the United States and around the world.

A strict coronavirus-fueled lockdown of major Chinese factories and industrial cities has led to a sharp drop in oil prices while sparking fears of widening supply chain disruptions. The price of oil fell Wednesday to $98, just $4 a barrel above where they were before Russia invaded Ukraine.

That fall came despite forecasts by the International Energy Agency on Wednesday that the world oil market could be short 3 million barrels a day of Russian oil if the conflict in Ukraine drags on.

While oil prices rebounded back above $100 a barrel on Thursday and Friday, the sudden fall highlighted the vital importance that Chinese demand for oil has on global prices — even in the United States.

Here’s where China gets its oil — and how that impacts prices elsewhere.

As the world’s largest energy consumer and biggest oil importer, China consumed about 4.6 billion barrels of oil in 2019 —  the last year for which the United States Energy Information Agency has statistics.

China is also highly dependent on foreign oil imports. Though it is the world’s fourth largest oil producer — following the U.S., Saudi Arabia, and Russia — China’s domestic production only makes up about 30 percent of its demand, supplying about 1.4 billion barrels of oil and other refined petroleum products. Virtually all of China’s own production is used domestically.

Before the coronavirus outbreaks and lockdowns in Shanghai and Shenzhen, Chinese crude oil imports for 2022 were expected to meet or exceed 2020’s record levels, which saw the People’s Republic import nearly 11 million barrels per day, as Reuters reported. That’s 12 percent of total global production, a quantity that many analysts expected would drive oil prices above $100 a barrel even without the conflict in Ukraine. 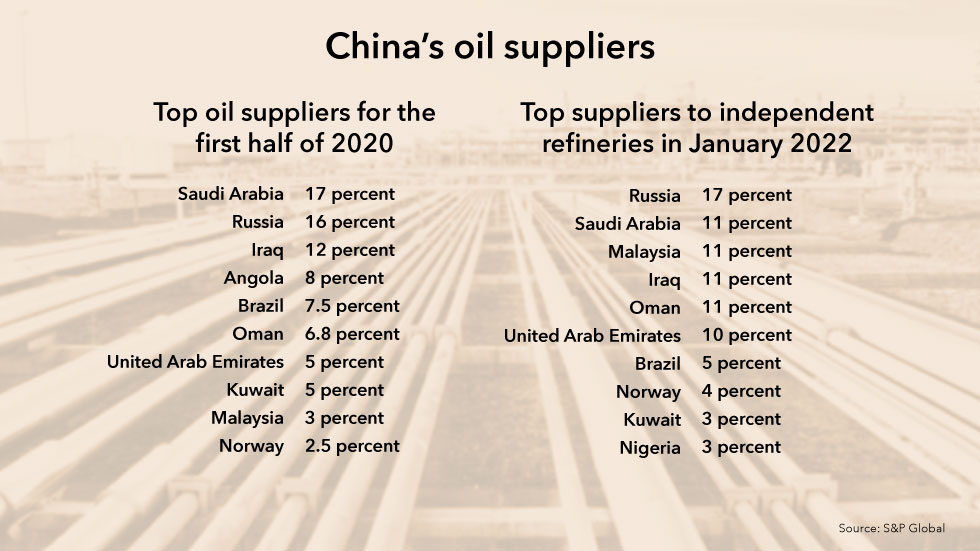 These independent refineries began cutting production — and therefore demand — earlier in March when oil surged above $130 a barrel, as S&P Global reported. That built on previous declines in 2021, which saw China’s annual crude oil imports fall 5 percent — its first decline in 20 years — as the Politburo sought to draw down what it saw as excessive fuel production.

It also came on the heels of a 33 percent cut in China’s refined fuel exports in February, as China’s government sought to ensure domestic supplies of fuel.

Though China doesn’t buy crude oil from the United States, it imported 14 million barrels of refined U.S. petroleum products in December 2021, down from a May 2020 spike of 46 million barrels. In 2020, China had only imported about 2 million barrels, according to the EIA — a level of volatility that helps show why the Chinese economy has such a powerful effect on world prices.