States that voted against President Obama twice are more dependent on the federal government, according to an analysis of new data released by the Pew Charitable Trusts on Monday.

All told, the average state that voted against Obama twice relied on federal funding for an average of 33.8 percent of its budget, the report found.

{mosads}Among the 27 states that voted for Obama twice, federal grants made up 29.9 percent of the average state budget.

The report shows that seven years after the beginning of the economic recovery, states across the country are more reliant on federal dollars to cover their costs than before the recession.

Most states are required to balance their budgets every year, which means states rely on federal money to plug holes more during a recession than they do in times of strong economic performance. The federal share of state budgets spiked between 1992 and 1996, as the economy recovered from a recession, and again between 2001 and 2004. 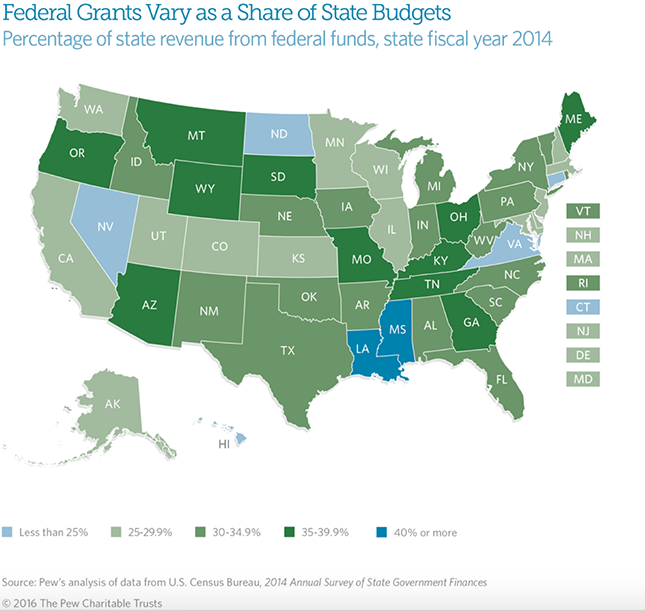 Republican states rely more heavily on federal dollars as a share of their budgets than do more Democratic states, largely because Southern states, especially, are more likely to have a higher percentage of residents living in poverty.

Meanwhile, a state like New York, which also has a large Medicaid program, relies less on the federal government for shares of its budget because it has a relatively strong tax base.

Grants for transportation programs, money for public schools and funding for the Temporary Assistance for Needy Families program are also major sources of federal grants made to the states.

A red state — North Dakota — was the least reliant on federal dollars for its budget. Just 16.8 percent of North Dakota’s 2014 budget was made up of federal grants, as taxes related to the state’s booming oil industry sent its total revenue soaring.

The drop in global oil prices is likely to change that equation: North Dakota faces a budget deficit now that the price of oil has fallen so dramatically, meaning its budget is likely to rely much more heavily on federal dollars this year.

Virginia, Connecticut, Hawaii and Nevada all rely on federal money for less than a quarter of their budgets, the Pew research shows. 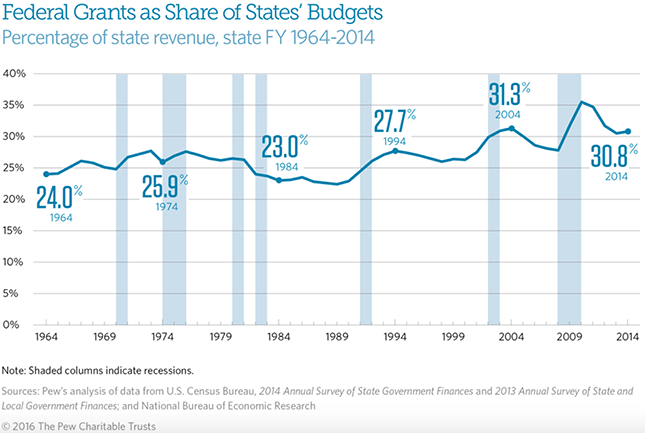 Five takeaways from primaries in Wisconsin, Minnesota and beyond