State tax revenues declined precipitously in the second quarter of the year as budget analysts warned of a growing trend of revenue decline that could lead to new rounds of budget cuts.

Preliminary figures released by the U.S. Census Bureau show states collected $271 billion in tax revenues between April and June, down nearly $7 billion, or 2.5 percent, from the same quarter a year ago.

{mosads}The drop was driven by a 3 percent decline in personal income taxes. Corporate income taxes fell 10 percent over the year before.

The second-quarter figures represent the largest year-over-year decline in state tax revenues since the end of the recession.

State budget analysts have been warning about falling revenue, which would put new strains on states still struggling to recover from the recession. Most analysts expect revenue to grow less than 2 percent over the next year, a worrying trend as rising costs force legislators to consider budget-cutting measures.

“Because the expenditure side of the budget tends to grow very fast, it certainly doesn’t help states if their tax revenues aren’t growing as fast,” said Dan Seymour, an analyst at Moody’s Investors Service who tracks state budgets.

The new figures are most troubling, experts said, because states rely more on individual tax revenue than on any other source of money. Sales tax revenue, the second-largest source of state income, remained virtually unchanged.

“The primary culprit [responsible for the decline] is personal income taxes, which we think are mainly driven by the stock market performance in calendar year 2015,” Seymour said. “The slowdown in sales taxes indicates there might be a slowdown in income generally.”

The slowdown in state revenue growth began in the middle of 2015, led by weak gains in the stock market and declining oil prices, the nonpartisan Nelson Rockefeller Institute of Government reported.

The S&P 500 Index, a broad measure of the stock market, grew by just 1.4 percent in 2015, far lower than in recent years. That slow growth impacts capital gains taxes, where many states experienced growth in the wake of the recession.

Analysts attributed some of the lost revenue growth to changes made by state legislatures in 2015 that are only now taking effect. Ohio, California, Connecticut, Louisiana and Maine all saw their receipts decline after legislatures either cut tax rates or expanded tax credits. Kansas’s receipts increased after the legislature raised sales taxes. 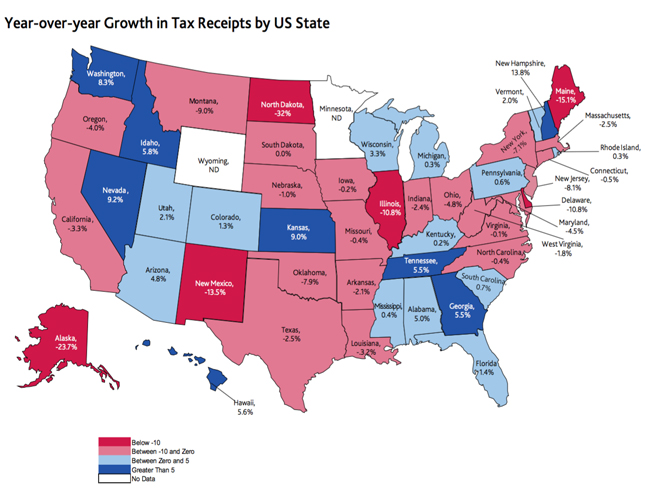