The report, from Moody’s Investors Service, shows states are already liable for an estimated $1.25 trillion in pension costs for current employees and retirees.

{mosads}It says those costs are likely to mount with inflation.

The rising costs will contribute to budget crises that will force states to rethink spending priorities.

Legislators and governors in many states will have to decide whether to face some budget pain now or leave it to their successors to take on significantly more pain in the future.

“This is something we have to get addressed,” said Glenn Hegar (R), the Texas state comptroller. “These are the things we need to be looking [at going] forward into the future.”

Half the states are paying less than what is required to meet their annual liabilities, Moody’s reports. That will force them to pay more in future fiscal years to meet their long-term liabilities.

Kentucky, New Jersey and Illinois are among the states where the crisis is the most severe. All face large shortfalls between contributions to their pension funds and growing liabilities as more workers owed pensions retire.

“Some states have very large pension liabilities that they are having a hard time managing,” said Marcia Van Wagner, a senior Moody’s analyst. States “have not contributed sufficient amounts of money to their pension funds over a long period of time. They have a habit of underfunding their pensions.”

Illinois, California and Texas are liable for more than $100 billion in benefits owed to current and former state employees, the highest in the nation.

Illinois’s $192 billion in obligations, due over the lifetime of current retirees and state employees who will be owed retirement benefits, dwarfs what the state takes in total tax revenue. In fact, the liabilities are more than four times the state’s total tax revenue for a single year.

Connecticut, Kentucky, Alaska, New Jersey and Maryland all have liabilities that are more than twice what they take in annually in total taxes and fees.

Many of those states with the most severe pension problems face a more intractable underlying issue: Political gridlock.

“The fundamental problem is actually people coming to terms with the challenges and sitting down and being able to negotiate across the aisle. There’s some very, very strong institutional barriers to that,” said Washington state Treasurer Jim McIntire (D), whose office oversees more than $5 billion in state investments.

The poor performance of the market in fiscal year 2016, when the S&P 500 index gained less than 1 percent, meant states did not realize the returns they expected: While the average state pension system projected a 7.5 percent annual return on investments in 2015, the median pension plan actually returned only 0.52 percent, Moody’s said.

Moody’s also warns that with stagnated inflation and flattened out markets, states can’t count on larger stock returns in the coming years.

A high rate of return “is not going to be the norm in coming years,” Hegar said. “Creativity to figure out how you can make a higher return is a little more difficult in this market environment.”

Given that many states were hoping for bigger returns, their total bills will grow significantly if the market does not rebound. Moody’s estimates total pension liabilities will stand at $1.75 trillion — up $500 billion from this year — by fiscal year 2017.

Growing pension costs, which states are obligated to pay, will begin to eat up money that would otherwise be spent on infrastructure, education or other state priorities.

“Typically, it doesn’t become a crisis in the sense of something that suddenly happens. It has a more subtle effect over time in squeezing budgets leading to trade offs in paying pensions rather than paying for other things,” Van Wagner said.

Some states have moved in recent years to begin reining in pension costs. Rhode Island passed a significant pension reform measure in 2015. New Jersey has implemented reforms to cost of living adjustments that will help curb future costs.

New York has created lower tiers of benefits for new state employees. Texas enacted legislation in 2015 that increased employee contributions to their own retirement systems by 2 percentage points.

While some states begin exploring riskier investments to achieve higher returns, other public pension plans are beginning to embrace a more realistic view of acceptable returns. The California Public Employees Retirement System, CalPERS, has embarked on a multi-year effort to de-risk its pension fund and to change its asset mix to protect the money already in the system.

Kentucky is another state working to alleviate its own crisis. The state legislature voted to increase contributions to its pension system by $1.4 billion over the next two fiscal years. 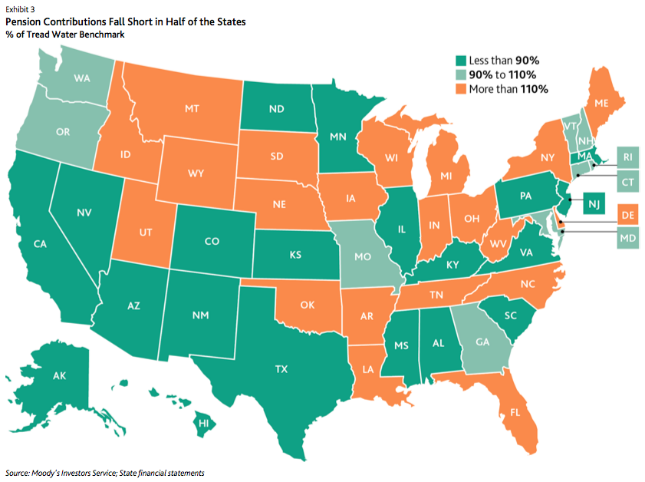 On The Money — Shutdown looms as Congress spars over funding