Americans brimming with optimism on the economy

A strong majority of Americans say the U.S. economy is running strong, and most believe the upward trend will continue under President Trump, according to a Harvard-Harris poll provided exclusively to The Hill.

The survey found that 61 percent view the economy as strong, against 39 percent who say it is weak.

A plurality, 42 percent, said they believe the economy is on the right track, versus 39 percent who said it is on the wrong track.

Trump and congressional Republicans have claimed credit for the turnaround, noting numerous polls in 2016 that showed that many Americans wanted change in the nation’s capital. Democrats counter that former President Obama handed a healthy economy to Trump and point out that the unemployment rate has dropped under 5 percent. At a press conference on Thursday, Trump said he inherited “a mess.”

{mosads}Among Republicans surveyed in the Harvard-Harris poll, 60 percent are satisfied with the economic trajectory, versus 23 percent who are dissatisfied. Only 33 percent of Democrats said the economy is on the right track, while 48 percent said it is headed in the wrong direction.

At 65 percent, Trump voters are the likeliest to say the economy is headed in the right direction.

“It’s really a surprising turnaround given how negative voters have been about the economy since 2009,” said Mark Penn, co-director of the Harvard-Harris poll. “But jobs remains the number one issue and a lot of the change in sentiment anticipates tax cuts and infrastructure programs.”

The stock market is soaring and January marked the 76th consecutive month of job growth. The economy added 227,000 new jobs in January, far greater than the 175,000 economists had expected.

The White House has taken credit for that report, saying that companies are increasing hiring amid optimism that Trump would foster a more friendly business environment than the previous administration. 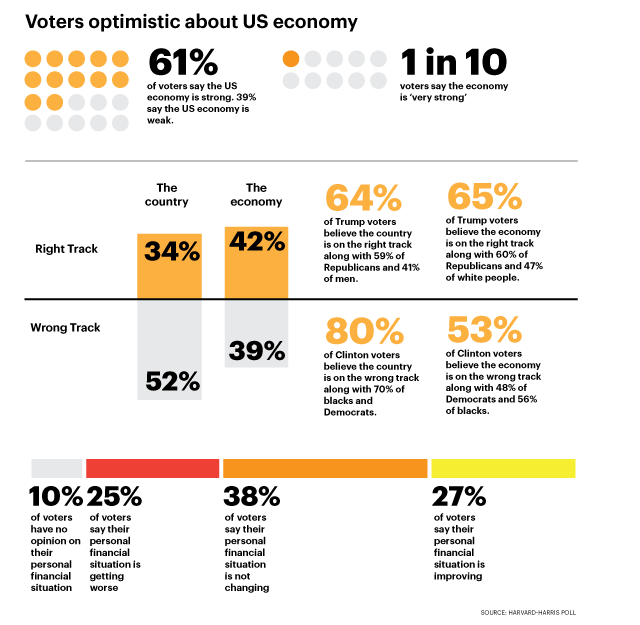 In an interview with The Hill last month, Senate Majority Leader Mitch McConnell (R-Ky.) criticized Obama’s record, saying under his watch the country “didn’t have a single year of 3 percent growth, and the statute of limitations on blaming [former President George W. Bush] ran out a long time ago.” He also said the stock market is rising because of the “expectation of regulatory relief and tax reform.”

Trump, whose success as a real estate developer was central to his campaign pitch, has made job growth a priority. He meets frequently with business leaders and has signed executive orders aimed at dismantling Obama-era regulations and scaling back Wall Street reforms implemented in the wake of the 2008 economic crisis.

Still, only 27 percent of Americans said their personal financial situation is improving. Twenty-five percent said things are getting worse for them, and 38 percent said they’re doing just as well as before.

The economy aside, Americans have a far more pessimistic view of the nation’s trajectory as a whole, with only 34 percent saying the country is on the right track, against 52 percent who say things are headed in the wrong direction.

The online survey of 2,148 registered voters was conducted between Feb. 11 and Feb. 13. The partisan breakdown is 39 percent Democrat, 30 percent Republican, 27 percent independent and five percent other. The Harvard-Harris Poll is a collaboration of the Harvard Center for American Political Studies and The Harris Poll.

Congress on track to blow past Dec. 16 funding deadline

US home prices slow in September

The Memo: Republicans’ fervor to go after Fauci could backfire