GOP leaders have few sure votes on debt ceiling

Only 16 House Republicans who are currently in office backed the last “clean” debt hike, and few of them will say they are certain to support it this year.

If the debt ceiling is raised with a clean hike — a distinct possibility given Democratic demands and the narrow, 52-seat majority for the GOP in the Senate — Republicans will need at least 24 members of their own conference to back a clean debt bill in the House.

That could be a tall order. Only four of the 16 Republicans who voted for the clean debt hike in 2014 suggest they will or are open to doing so this fall.

“We’ve not made any public statements,” said a spokesperson for Rep. Peter Roskam (R-Ill.).

{mosads}Speaker Paul Ryan (R-Wis.), who would be charged with convincing Republicans to back the bill, voted against the clean debt hike in 2014, when he was still chairman of the House Budget Committee. Only 28 Republicans backed it, and 12 of them are no longer in Congress.

In the Senate, every Republican opposed the clean debt-ceiling bill on final passage.

It’s also far from clear that every Democrat in the House will back a clean debt hike.

This will be the first time in more than a decade that Republicans will have to raise the debt ceiling while controlling the White House and both chambers of Congress. 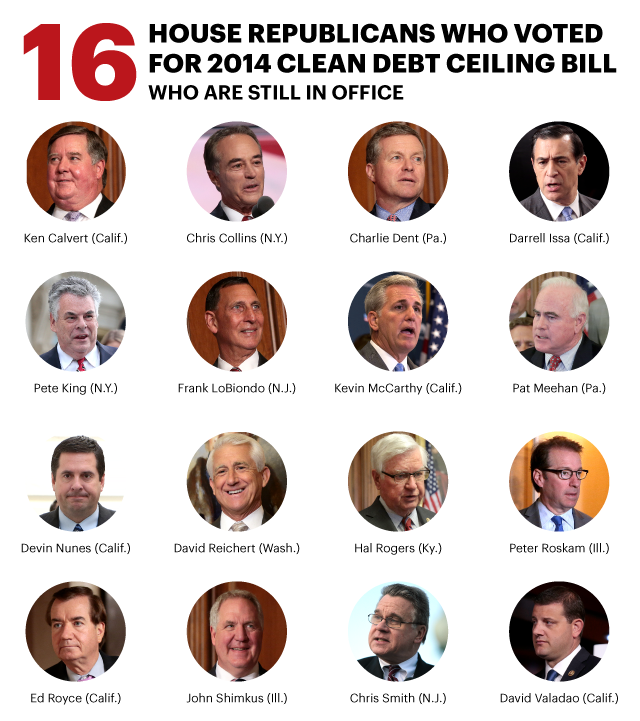 That political dynamic puts all of the responsibility for raising the debt ceiling on the GOP, and little if any on Democrats. House Minority Leader Nancy Pelosi (D-Calif.) will not want to give slack to vulnerable Republicans who don’t want to back the debt ceiling hike for their own party’s president.

“I don’t see Democrats bailing out Republicans, just like Republicans didn’t bail out Democrats,” said Steve Bell, senior advisor for the Bipartisan Policy Center and a former staff director of the Senate Budget Committee. “They’ll say, ‘We’re going to give you the same amount of help you gave us.’”

In the spring, Pelosi and Senate Minority Leader Charles Schumer (D-N.Y.) suggested that Democrats could withhold support from a clean debt hike if Republicans separately press for legislation cutting taxes on the wealthy.

They later said that Democrats would back a clean debt hike, but Pelosi will want as many Republicans as possible to support it since their party controls the White House. And the tax talk has given an argument to any liberal who chooses to oppose a debt ceiling hike.

Only four of the 16 House Republicans who backed the clean debt ceiling in 2014 suggested they would consider voting for a clean debt hike this year: Reps. Charlie Dent (Pa.), Darrell Issa (Calif.), Pete King (N.Y.) and David Valadao (Calif.).

Dent, a longtime centrist GOP leader, acknowledged more Republicans will probably have to take that step.

“Guess what? We’ll need at least 24 Republicans, and it should be a much larger number than that,” he said.

Conservative Republicans are already pressing Ryan to tie spending cuts or budgetary reforms to a debt-limit bill, signaling they do not plan on changing their strategy with fellow Republican Donald Trump in the White House.

Democrats, however, say they will insist on a clean debt hike.

This means that if the House could pass a debt ceiling bill that included provisions backed by conservatives, their brethren in the Senate would need at least eight Democrats to back it in the upper chamber to overcome an expected filibuster.

The Trump administration has given mixed signals about the debt ceiling.

Treasury Secretary Steven Mnuchin has called for a clean debt hike and initially said it should be done before the August recess. He has since said a vote could take place in September.

Trump budget director Mick Mulvaney, a former House Republican who demanded steep budgetary restrictions be tied to the debt limit hike, has said there should not be a clean debt hike vote.

Some Republicans who backed a clean debt hike in 2014 are expressing confidence the votes will be there in 2017.

He’s one of five members, along with Roskam and Reps. David Valadao (Calif.), Pat Meehan (Pa.) and Ed Royce (Calif.), who backed the last clean debt hike and represent districts won by Democratic nominee Hillary Clinton in the 2016 presidential election.

“This will happen,” said Dent of passing the debt lift. “The question is how much drama will be endure between now and the time that happens.”

Bezos, Musk and other billionaires lose combined $1.4T in first half of 2022