House approves motion to go to tax conference — with drama

The House in a 222-192 vote on Monday voted to approve a motion to go to conference with the Senate on tax legislation — though the vote was filled with drama after several House Freedom Caucus members protested leadership’s plans for a two-week stopgap spending bill.

At one point, the vote was tied as members of the conservative Freedom Caucus huddled with leadership over the continuing resolution (CR). The measure passed when caucus members got assurances that leadership would consider a CR to fund the government through Dec. 30 instead of Dec. 22.

The Freedom Caucus’s holdup on the tax motion to gain leverage on the CR did not go over well with other Republicans.

But Freedom Caucus Chairman Mark Meadows (R-N.C.) said that a spending bill to Dec. 30 works better than a two-week bill because it would give lawmakers more time to negotiate a deal over spending caps.

“It also gives us enough time to make sure we get tax reform done,” he told reporters.

Republicans are highly motivated to produce their first major legislative victory of President Trump’s tenure, meaning a bill is likely to be sent to the White House by Christmas. The Senate will vote this week on naming its own conferees.

At the same time, there are some significant differences between the two bills that have to be ironed out.

{mosads}Each measure would cut the corporate tax rate from 35 percent to 20 percent, substantially increase the standard deduction and move the U.S. to a territorial tax system that generally exempts corporations’ foreign earnings from U.S. taxes.

But in some areas, the bills diverge or do not sync up perfectly.

Some of the differences between the House and Senate bills have to do with the budget reconciliation rules that allow tax legislation to pass the Senate with only a simple-majority vote.

Under the rules, legislation can’t increase the deficit after 10 years. As a result, the Senate’s bill sunsets the tax cuts for individuals after 2025, while the House bill does not. 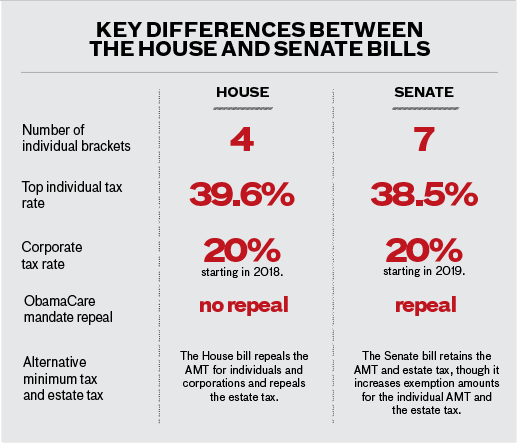 Because of the Senate rules and the slim GOP majority in the chamber, many expect the final product to look more like the Senate bill.

“My assumption is that the Senate-passed bill will be the starting point ‘base text’, given that it complies with the Senate budget rules and it was able to secure enough votes to pass,” said Marc Gerson, chair of Miller & Chevalier and a former House Ways and Means Committee aide.

Besides the expiration date, the two bills differ in other ways on the individual side of the code.

The House bill reduces the number of individual tax brackets from seven to four, but it keeps the top rate at 39.6 percent and also includes a “bubble rate” above that for some income of high earners. Some conservatives have raised concerns about the top bracket and the bubble rate.

The Senate bill lowers the top rate to 38.5 percent and doesn’t include a bubble rate. However, it continues to have seven individual tax brackets.

Both bills increase the child tax credit, but the Senate does so more generously. The credit is bumped up from $1,000 to $1,600 in the House bill and is expanded to $2,000 under the measure passed by the Senate, where Sens. Marco Rubio (R-Fla.) and Mike Lee (R-Utah) have made boosting the credit their top tax priority.

The House bill is generally more aggressive in limiting or eliminating tax preferences. For example, the House bill repeals the medical expense deduction and lowers the cap on the mortgage-interest deduction, while the Senate bill does not do these things.

House Majority Leader Kevin McCarthy (R-Calif.) said in an interview for The Hill’s “Power Politics” podcast last week that he would like to have the bill go further so that income taxes could be deducted in some cases.

“In California, you could deduct your property tax in this bill but you could not even reach the full $10,000, but why don’t you use it one way or another,” he said.

The House bill repeals the estate tax and the individual alternative minimum tax, which Republicans have long disliked, while the Senate keeps both taxes but increases their exemption amounts.

The House and Senate bills also have differences when it comes to businesses.

A 20-percent corporate rate has been a red line for Trump and some conservative lawmakers. However, Trump on Saturday suggested that the rate could go up to 22 percent.

Both bills would lower taxes for pass-through businesses, such as sole proprietorships and partnerships, that pay taxes through the individual code. However, the two bills take different approaches in how they achieve that goal, with the House setting a top rate for certain pass-through income of 25 percent and the Senate providing a 23-percent deduction for pass-through income. The Senate’s pass-through provisions expire after 2025.

Rohit Kumar, a former aide to Senate Majority Leader Mitch McConnell (R-Ky.) who now works at PwC, said that approaches in the House and Senate on pass-throughs are so different that lawmakers will have to pick one chamber’s version to serve as a starting point.

“It’s hard to do a blend of the House and Senate pass-through rules,” he said.

While the bills both move the U.S. to a territorial tax system, they include different provisions about how to prevent that change from resulting in an erosion of the U.S. tax base.

In order to raise revenue, the Senate on Friday amended its bill to retain the corporate alternative minimum tax (AMT), which the House bill would repeal.

Businesses are concerned that keeping the corporate AMT would have the unintended consequence of effectively eliminating the benefit of a number of tax preferences for many companies.

“Retaining the AMT in reform is even more harmful than it is in its present form — among other things, it eviscerates the impact of certain pro-growth policies like the [research and development] tax credit and exacerbates the international anti-abuse rules,” Caroline Harris, vice president of tax policy at the U.S. Chamber of Commerce, said in a blog post Monday.

McCarthy told CNBC Monday that that the corporate AMT “has to be eliminated,” since keeping it ”would destroy R&D.”

The Senate bill also includes the repeal of ObamaCare’s individual mandate and allows drilling in a portion of the Arctic National Wildlife Refuge, which were not part of the House bill. Those provisions are likely to be included in the final bill.

62 percent of Americans worried about paying for housing in the next year: poll