Overnight On The Money — Senate Democrats lay out their tax plans

Today’s Big Deal: Senate Democrats have made steps toward cementing the tax portions of Biden’s economic bill. We’ll also look at the latest on the broader infrastructure talks, the Fed’s push to restore its credibility and Manchin’s objection to a key provision of Biden’s agenda.

But first, some progress toward vaccinating youngsters. 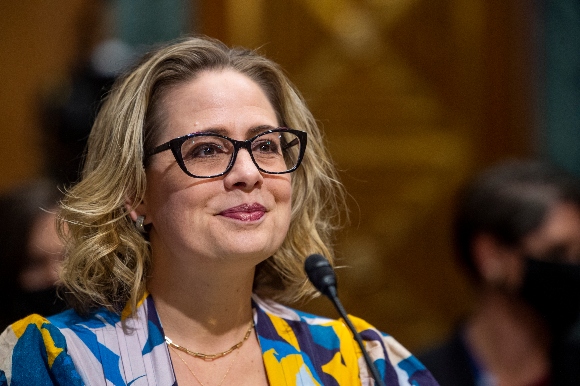 Key senators on Tuesday released legislative text of a proposal for a minimum tax on corporate profits, which they are eyeing as a way to help pay for Democrats’ social-spending package.

“The most profitable corporations in the country are often the worst offenders when it comes to paying their fair share. Year after year they report record profits to shareholders and pay little to no taxes,” Senate Finance Committee Chairman Ron Wyden (D-Ore.) said in a statement.

And, it’s one of several proposals that Democrats are considering for the social-spending package in light of Sen. Kyrsten Sinema’s (D-Ariz.) objections to raising tax rates.

“This proposal represents a commonsense step toward ensuring that highly profitable corporations — which sometimes can avoid the current corporate tax rate — pay a reasonable minimum corporate tax on their profits, just as everyday Arizonans and Arizona small businesses do,” Sinema tweeted.

Naomi breaks it down here.

Coming up: Wyden is expected to release a second tax proposal, to tax billionaires’ investment gains annually, later on Tuesday. Naomi will be staying up late to keep you posted — on her birthday no less!!! — so keep checking TheHill.com for the latest.

Democratic leaders scrambling for an infrastructure vote this week to boost two Democratic gubernatorial candidates hit a brick wall on Tuesday, when the head of the Progressive Caucus said liberals will oppose the popular public works bill until a larger benefits package is finalized.

Rep. Pramila Jayapal (D-Wash.) emerged from an hour-long meeting with Speaker Nancy Pelosi (D-Calif.) amplifying her long-held position: Progressives won’t support a bipartisan infrastructure bill, known as the BIF, before there’s agreement on every detail of the social spending package at the heart of President Biden’s domestic policy agenda.

“Let’s vote both of them out at the same time, and I would even be willing to vote the BIF and then three hours later the reconciliation bill as long as we have full agreement from everybody — everyone on the House side, everyone on the Senate side,” Jayapal told reporters.

Why that is an issue: Jayapal’s entrenched position is a stark repudiation of those Democrats seeking a quick infrastructure vote whenever negotiators reach agreement on a “framework” governing the larger social spending bill. And it’s sure to aggravate those lawmakers arguing that a victory on infrastructure will lend a jolt of momentum before next week’s elections.

Read more on the push for a climate and social services bill:

Senate Democrats working on the climate provisions of the budget reconciliation package think they have a path to a deal that will include a methane fee and believe they will get buy-in from centrist Sen. Joe Manchin (D-W.Va.).

Sen. Joe Manchin (D-W.Va.) criticized a proposal to increase the amount of information the IRS receives about bank accounts, saying he thinks it is unlikely to be included in Democrats’ social spending package.

Democrats are considering the IRS bank-reporting proposal as a way to raise revenue to finance their social spending measure. It would require banks to report to the IRS the total amount of money that came in and out of an account during a year.

“I think that one’s going to be gone,” Manchin said at an event.

DON’T CALL IT A COMEBACK

The Federal Reserve is attempting to tamp down two significant challenges to its credibility as both its handling of inflation and internal ethics face growing scrutiny.

The central bank is quickly moving to address a scandal involving stock trades made by its top officials. And price increases are running higher and longer than many Fed officials expected, boosting pressure on the bank to slam the brakes on the recovery from the COVID-19 pandemic and back down from a new, more tolerant approach to inflation.

Both could have deep implications for the Fed as a whole, as well as for Fed Chairman Jerome Powell’s future at the institution.

Senate Budget Committee Chairman Bernie Sanders (I-Vt.) said on Tuesday that a deal on President Biden’s spending bill must expand Medicare and include a plan to lower the cost of prescription drugs.

Spanx founder Sara Blakely gave her employees two first-class plane tickets and $10,000 to spend on the trip to celebrate her company’s billion-dollar deal.