Ballot measures explode across country — and so do their costs

On the other side, Altria and R.J. Reynolds, the two largest tobacco manufacturers in the country, contributed a combined $17 million on a single day in July to defeat Proposition 56.

{mosads}The big money reflects the high stakes involved in ballot measures across the country, and the increasing importance in getting cash behind the campaigns to defend and oppose them.

Aside from the race for the White House, the most expensive single contest in November’s election is likely to be over a ballot measure.

At least 123 measures will appear on ballots across the country in November. Most are referred to the ballot by state legislatures. Fifty of those measures are initiatives, spearheaded by political groups independent of state legislatures that must collect tens or hundreds of thousands of signatures to qualify for a spot on the ballot. 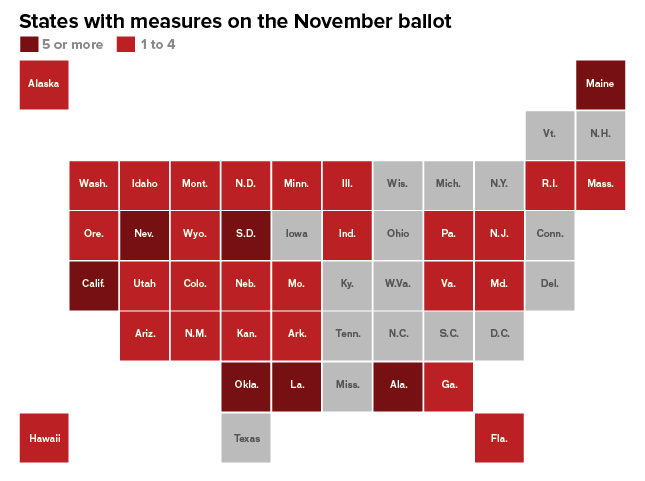 The citizen-sponsored measures cover topics ranging from gun control, marijuana legalization and the death penalty to less sensational matters: Voters in Massachusetts will decide whether to prohibit certain types of farm animal containment, and Oregonians will vote on whether to establish a state fund aimed at preventing people from dropping out of high school.

California voters will be asked to decide whether adult entertainers should be required to use condoms while shooting pornographic movies.

Costs to mount or oppose a ballot initiative campaign have skyrocketed.

In many states, professional operatives charge up to $5 for each valid signature they collect.

Advertising is expensive, and the presidential election year adds to those costs.

Legal costs have also gone up because of the growing practice of litigating an initiative even before it makes the ballot.

“This will be a very expensive year,” said Justine Sarver, executive director of the Ballot Initiative Strategy Center, which supports progressive ballot measures. In 2012 and 2013, Sarver’s group identified more than $1 billion spent on ballot measure campaigns; this year, total spending is likely to set a new record.

“A billion dollars on ballot measures, that’s quite a political industry,” Sarver said.

California, where ballot measures have played an important role in state politics since Gov. Hiram Johnson introduced the practice in 1911, is experiencing a ballot boomlet.

Seventeen different measures will crowd the November ballot, and observers say six to eight of those measures — including the hike in cigarette taxes — could end up raising more than $40 million apiece.

“The cost of ballot measure campaigns reflects the costs generally of media in each state,” said Brian Brokaw, a California Democratic strategist who has worked on ballot measures. “The higher the financial stakes for impacted interests, the more is typically spent.”

The early front-runner for the most expensive race in the nation is Proposition 61, a measure that would allow state agencies to pay the same price the U.S. Department of Veterans Affairs pays for prescription drugs. Supporters have raised nearly $10 million to make their case. Pharmaceutical companies like Bristol-Myers Squibb, Johnson & Johnson and Amgen have contributed a whopping $69 million to the campaign against Prop. 61.

Spending on ballot measures is increasing in other states, as well. In Colorado, energy companies have directed more than $8 million to fight against two ballot measures that would ban hydraulic fracturing, a process of oil and gas extraction also known as fracking, close to residential communities. In Florida, the solar industry has contributed $16 million toward a measure that would enshrine the right to own solar energy equipment in the state constitution.

Florida and California are two of eight states that will vote on liberalizing marijuana laws. California, Maine, Nevada and Massachusetts will decide whether to legalize the drug for recreational purposes. Florida, Arkansas and Montana voters will decide whether to allow marijuana to be prescribed for medical use. A measure to legalize marijuana for recreational use in Arizona awaits certification from the Secretary of State’s office.

Even with increased costs, the number of ballot initiatives that voters will face this year is down significantly from recent years. Josh Altic, who researches ballot measures for the nonpartisan Lucy Burns Institute, says the 123 measures that have secured spots on the ballot so far this year is below the 158 that qualified in 2014, and less than half the recent high of 272 measures, back in 1998. 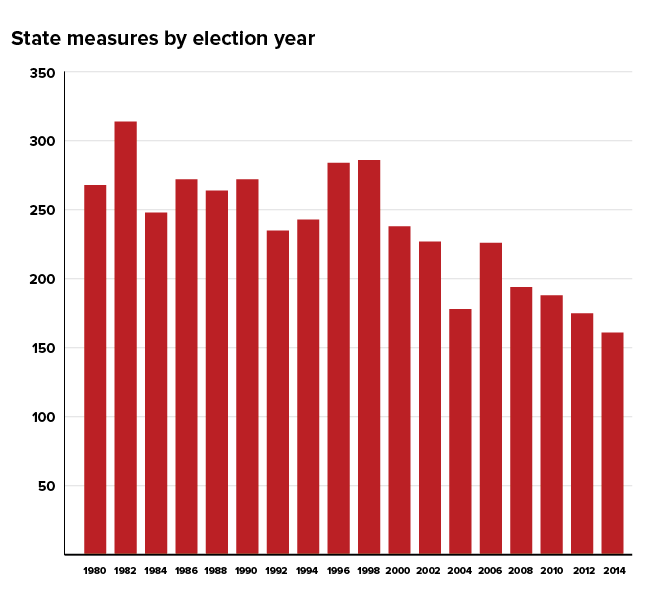 Dan Smith, a University of Florida political scientist who studies ballot measures, cites two factors in the decline: First, legislatures across the country are referring fewer issues to voters. Second, many of the types of ballot measures that flooded ballots a decade ago — hot-button issues like caps on taxes or same-sex marriage — either have already appeared on most state ballots or have been settled by courts.

At the same time, Altic said, the threshold necessary for qualifying a ballot measure has fallen almost across the board. Most states require a ballot initiative to attain a certain number of signatures based on the percentage of voters who cast ballots in a previous election year; low voter turnout in the 2014 midterm elections means the actual number of signatures needed to qualify is now lower than it was two years ago.

In California, successful initiatives must attract signatures from 365,880 registered voters, down from 504,760 signatures needed in 2014, when the figure was based on presidential election turnout from 2012. Signature requirements are down more than 20 percent in states like Ohio, Wyoming, Nevada and Oklahoma. The signature threshold has risen in only four states: Colorado, Oregon, Maine and Arkansas.