Eight of the states that will determine the Senate majority in November are likely to see significant reductions in the number of insurers participating in ObamaCare marketplaces.

The likely departures of insurers in Illinois, Wisconsin, Florida, Pennsylvania, Ohio, North Carolina, Arizona and Missouri are pushing the healthcare law toward the center of some of the most competitive Senate races in the country.

{mosads}GOP strategists say Obama-Care’s troubles this year are morphing into a perfect storm for their candidates, providing a boost in a year when the party is defending 24 Senate seats.

“It feels like there’s a sleeping giant that’s about to awaken on the campaign trail,” veteran Republican strategist Ron Bonjean said. “It really does seem like an easy target, an easy layup for Republicans to score points.”

Health insurers have been fleeing the marketplaces over the last year, citing steep financial losses. The departures, which have included industry leaders like UnitedHealth Group and Aetna Inc., are cutting into the choices people have when selecting ObamaCare plans.

Next year, exactly half of all states are expected to see fewer ObamaCare options in at least one county, according to data compiled by the Kaiser Family Foundation.

An analysis of the Kaiser data by The Hill found that the exits from ObamaCare align with some of the biggest battlegrounds for Senate Republicans this year.

Every county in Ohio, a crucial swing state, is on track to lose at least two insurers compared to last year. All of the counties in Pennsylvania, Indiana, Missouri, Arizona and Illinois are also expected to lose at least one option, according to Kaiser. 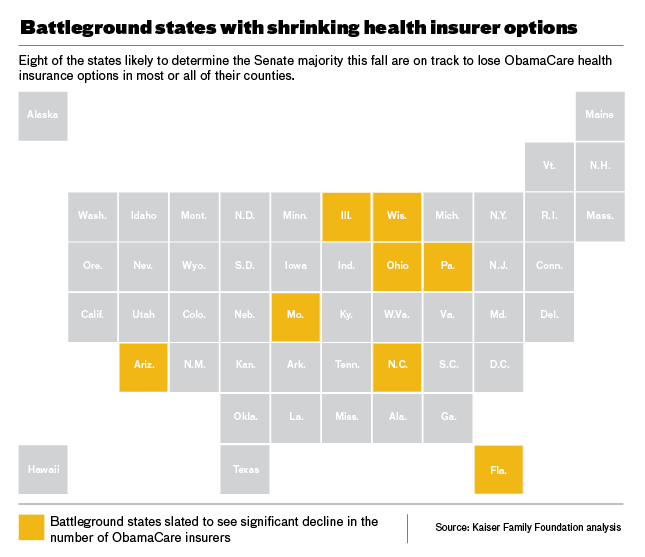 Four other Senate battlegrounds — Florida, Wisconsin, North Carolina and Colorado — are slated to lose ObamaCare options in at least half of all counties.

The shrinking insurance options could cause higher premium increases, something many ObamaCare customers would be informed of just eight days before the election.

The blowback to premium increases could be a factor in close Senate races. One of the Senate GOP’s leading policy voices, Sen. John Barrasso (R-Wyo.), has been urging his colleagues to talk about ObamaCare on the stump.

At a Senate Republican luncheon last week, Barrasso offered up some campaign-ready lines about ObamaCare, along with new poll data about the law’s unpopularity.

Some Senate GOP candidates are beginning to heed the advice.

Sen. Ron Johnson (R-Wis.), chairman of the Senate Homeland Security Committee and one of the GOP’s most vulnerable incumbents this year, announced Monday he plans to hold a hearing on several state health insurance markets.

He’ll bring in the insurance commissioners of Ohio, Wisconsin and Washington — all states that are projected to lose insurers next year.

Sen. John McCain (R-Ariz.), another incumbent up for reelection, believes he has perhaps the strongest case against ObamaCare. Next year, about 90 percent of counties in Arizona will be down to just one insurer — up from 0 percent last year.

Last week, McCain introduced a bill that would exempt people from ObamaCare’s individual mandate if they live in a county with fewer than two options for coverage. A few days later, Senate Majority Leader Mitch McConnell (R-Ky.) announced he would be fast-tracking it, allowing it to come to the floor any time this year.

The data from Kaiser about insurer departures, published Aug. 28, is still preliminary, though its lead author, Cynthia Cox, said Monday that the “general picture” would still be the same in each state.

Final data won’t be available until the latest round of ObamaCare signups starts Nov. 1, but to fill in the gaps until then, Kaiser researchers used insurer rate filings and press releases as well as reports from state and federal marketplace websites.

The White House has forcefully defended the law’s marketplaces, which now enroll 11 million people and have helped drive down the nation’s uninsured rate to below 9 percent for the first time.

Still, Health and Human Services Secretary Sylvia Mathews Burwell has increasingly talked about 2017 being a “transition year” for the exchanges. And in Burwell’s annual meeting with insurer executives on Monday, President Obama personally stopped by to talk about how to keep the marketplaces thriving, according to an official in the room.

While conservatives are warning of a national exodus from ObamaCare, healthcare experts caution that the impact on premiums will often be modest unless there is only one insurer left in a marketplace.

“The fact that insurers are pulling out — there may still be lots of choices,” said Leighton Ku, a professor of health policy at The George Washington University. Wu and others pointed out that there are still more healthcare players than when the exchanges first opened in 2013 and that many insurers have been offering similar products.

Still, he warned about the increasingly real scenario in which one insurer has a monopoly in the marketplace. One-fifth of ObamaCare customers are likely to have just one insurer to choose from this fall, compared to just 2 percent of people lacking any options last year, according to Kaiser.

“The competition issue becomes much more serious when it is in a county that used to have two plans and now only has one plan,” added Ku, who also sits on the board of the D.C. Health Exchange.