A photo is circulating online showing Mount Sinai Health System nurses using trash bags as a form of personal protective equipment (PPE) after a nursing manager died of the coronavirus on Tuesday.

The picture has garnered attention on social media as hospitals deal with a lack of supplies to treat the growing number of people diagnosed with COVID-19.

A system spokesperson told The New York Times that they were not aware of nurses wearing trash bags as protective gear and noted the photos show the staff wearing other gear below the bags.

In a statement to The Hill, a spokesperson said the hospital system “always” provides “all our staff with the critically important” PPE “they need to do their job.”

“If an individual does not have their proper PPE, they do not go on the floor, period. Any suggestion otherwise is simply not accurate,” the spokesperson said.

The spokesperson acknowledged that the pandemic is “straining the resources of all New York area hospitals.”

“This crisis is only growing and it’s essential that we not only have all the right equipment but that we come together to help and support one another,” the spokesperson said, adding they are “grieving deeply” over the nursing manager’s death.

In the richest city in the richest country in the world, this is how nurses are already being forced to protect themselves from coronavirus — with garbage bags https://t.co/FQXVVlQlTu #CoronavirusNewYork pic.twitter.com/TtD8XLzBsV 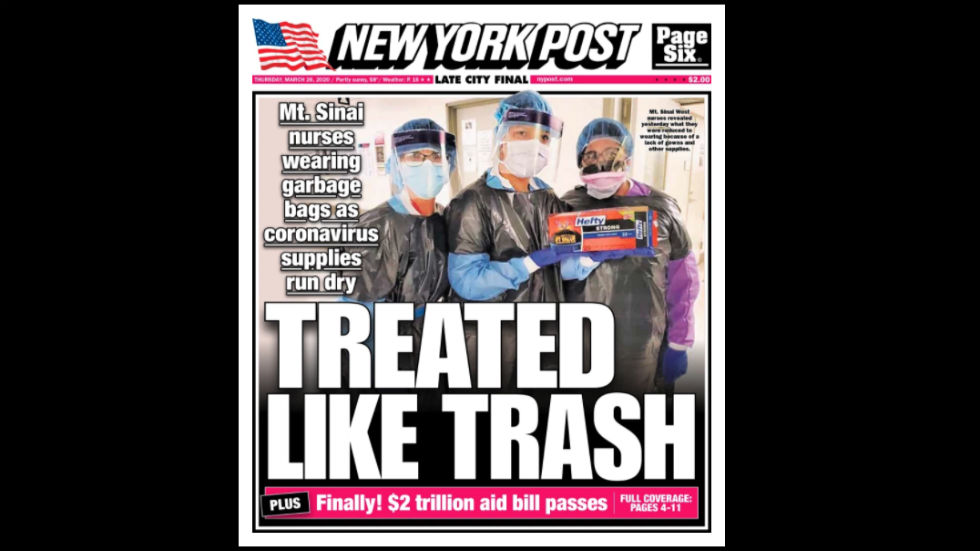 Mount Sinai West nursing manager Kious Jordan Kelly, who was in his 40s, had been hospitalized on March 17 before passing away on Tuesday, NBC Washington reported.

The Mount Sinai Health System released a statement on Twitter on Wednesday night saying it was “deeply saddened by the passing of a beloved member of our nursing staff.”

“Today, we lost another hero — a compassionate colleague, friend and selfless caregiver,” the health system posted.

We are deeply saddened by the passing of a beloved member of our nursing staff. Today, we lost another hero – a compassionate colleague, friend and selfless caregiver. pic.twitter.com/mn9JethD1x

New York City Mayor Bill de Blasio (D) and New York Gov. Andrew Cuomo (D) have warned that the hospitals have a lack of medical supplies to treat the growing number of patients in the city and the state. Both leaders have said this could lead to the hospitals being overwhelmed and unable to care for all of the patients streaming in.

The number of cases in New York state reached more than 30,800 as of Wednesday and at least 285 deaths in the state, according to Times data.

Abortion is banned or severely restricted in these states