Black and Hispanic Americans were disproportionately more likely to die of COVID-19 during the spring and summer months, a new indicator that the coronavirus’s toll is falling most heavily on underserved and minority communities.

A new analysis by the Centers for Disease Control and Prevention (CDC) of more than 114,000 Americans who died of COVID-19 between May and August found that 24 percent were Hispanic or Latino, even though only about 18 percent of Americans are of Hispanic decent.

Just 12.5 percent of Americans are Black, but Black people accounted for almost 19 percent of all coronavirus deaths during that four-month period.

About 51 percent of COVID-19 deaths occurred among white non-Hispanic Americans. Non-Hispanic whites account for 76 percent of the U.S. population, according to Census Bureau estimates. 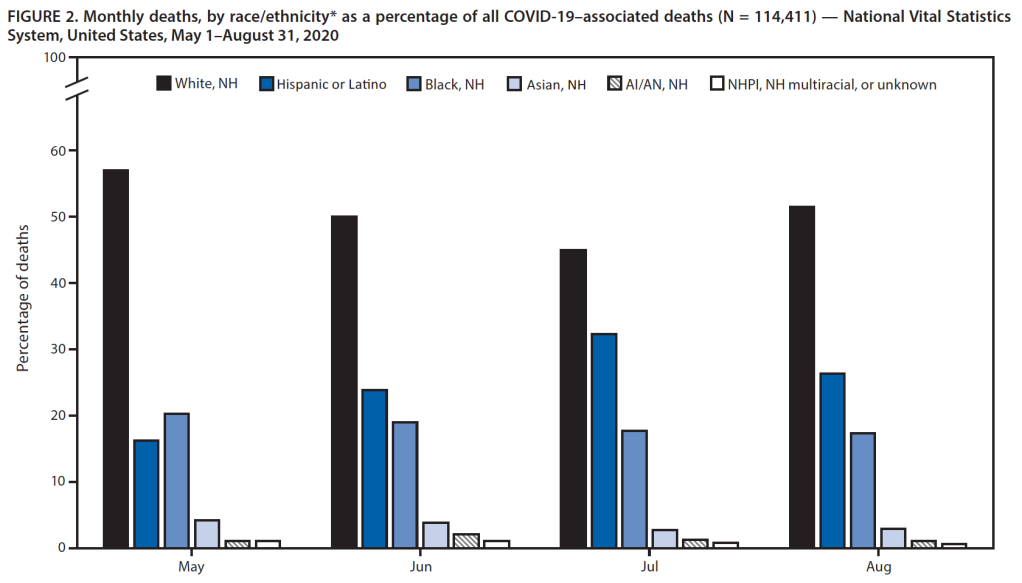 CDC researchers said in Friday’s report that the disproportionately higher death rates among nonwhites likely stems from different cultural and socioeconomic causes. Minorities are more likely to live in multigenerational or multifamily housing; more likely to work in jobs that require their physical presence such as meatpacking, service and health care jobs; and more likely to suffer from underlying conditions, such as diabetes and obesity, that are tied to worse outcomes among COVID-19 patients.

The new data also shows the marked geographic shift the pandemic made over the summer months. A first wave of COVID-19 cases that swept through the Northeast gradually moved south and west, and a little under half of all deaths tied to the virus in May occurred in Northeastern states. That number fell to under 10 percent by July.

In southern states, the death toll grew ominously. By July and August, about 60 percent of all COVID-19 deaths occurred in the South, while western states accounted for about 1 in 5 deaths.

Northeastern states, hit hard by a first wave of coronavirus infections, moved quickly to implement mask requirements and widespread testing regimes. They also moved far more slowly to lift lockdowns and restrictions on facilities like bars and restaurants, a contrast to southern and Sun Belt states that reopened early — and suffered through a devastating summer during which the virus ripped through younger adults.

CDC experts said the share of those who died who were over 65 and the share who were in nursing homes both declined over the summer months. That suggests older Americans took more precautions as infections among younger Americans rose, and that nursing home facilities became better at managing the risk after early outbreaks that swept through assisted living facilities in March and April.

Seniors died from COVID-19 at a higher rate than any other age group this summer: analysis

Citing Ebola concerns, US to divert and screen all travelers from Uganda