The developers of a plant-based COVID-19 vaccine said its recent trial showed the vaccine was 71 percent effective against variants, noting the omicron strain was not circulating during the study.

Today we’re also tracking at least two Senate Democrats who are set to vote against President Biden’s vaccine mandate for larger employers, which could come as soon as Wednesday.

Tester to back vote against vaccine mandate 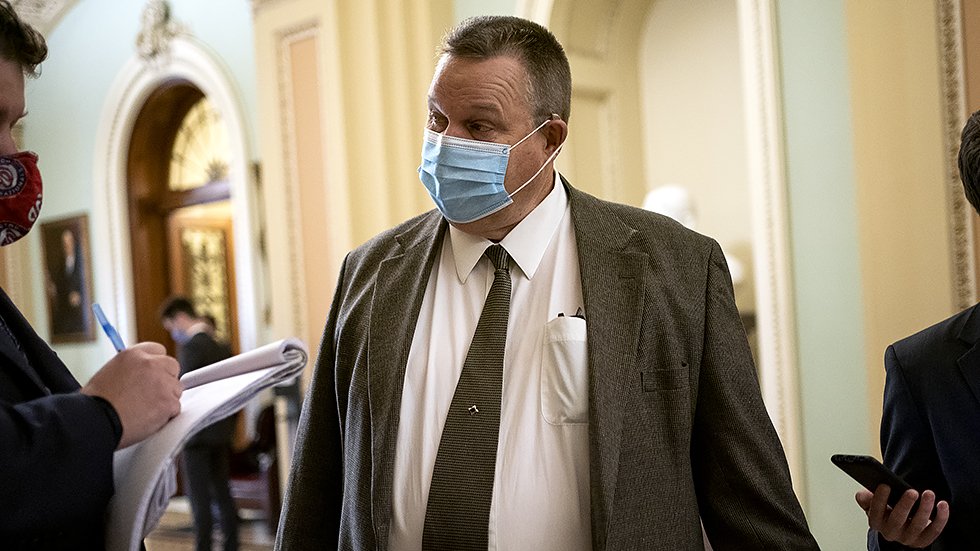 Sen. Jon Tester (Mont.), a centrist Democrat from a state that voted heavily in favor of former President Trump, is planning to vote for a Republican resolution to nullify President Biden’s vaccine mandate for large employers.

Tester is the second Senate Democrat to say he will support overturning Biden’s employer vaccine mandate under the Congressional Review Act.

West Virginia Sen. Joe Manchin (D) said last week that he would do so as well.

The Senate is expected to vote on the issue as soon as Wednesday and it will pass with the support on Manchin and Tester as every single Republican senator is planning to vote for the resolution.

“I’m not crazy about mandates,” Tester told a reporter for NBC News Tuesday.

A spokesman for Tester confirmed that his boss is “inclined to vote for the CRA resolution” sponsored by his Republican colleagues.

Path forward: Once the Senate passes the resolution to stop Biden’s mandate it will go to the House, where Speaker Nancy Pelosi (D-Calif.) does not plan to schedule a vote on it.

Republicans, however, can force Pelosi’s hand if they can get a majority of the House to sign a discharge petition to require a floor vote.

If it ever managed to get through the House, Biden would veto it.

A federal judge in Georgia on Tuesday temporarily halted the Biden administration’s COVID-19 vaccine mandate for federal contractors across the country.

The ruling by U.S. District Judge R. Stan Baker, an appointee of former President Trump, is the latest in a series of legal setbacks for President Biden as his administration seeks to blunt the effects of a global pandemic that has killed more than 788,000 people in the U.S.

“The Court acknowledges the tragic toll that the COVID-19 pandemic has wrought throughout the nation and the globe,” Baker wrote in a 28-page ruling. “However, even in times of crisis this Court must preserve the rule of law and ensure that all branches of government act within the bounds of their constitutionally granted authorities.”

Baker, whose order blocks the mandate while the case plays out in court, said the challengers were likely to prevail on their claim that Biden exceeded his authority with the public health measure.

Federal contractors were facing a Jan. 18 deadline to be fully vaccinated.

Big picture: Federal courts have presented a major obstacle to the Biden administration’s pandemic response, particularly when presided over by Republican-appointed judges.

Biden’s vaccine rules for private businesses, health care workers and federal contractors have all been tied up in court challenges from Republican officials. 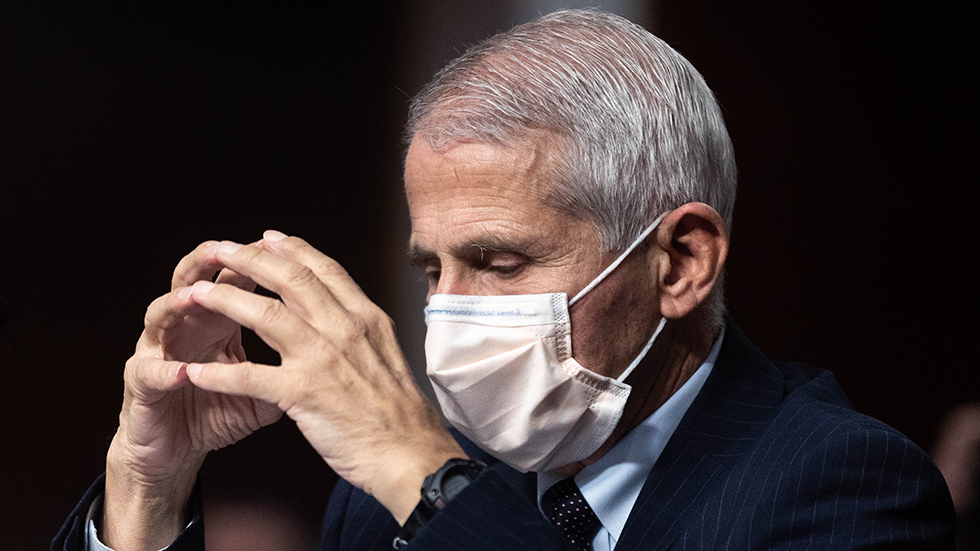 Top infectious diseases doctor Anthony Fauci said Tuesday that the omicron variant of the coronavirus seems to be less severe than delta, but he cautioned it will take more time to get a fuller picture.

“It’s too early to be able to determine the precise severity of disease but inklings that we are getting, and we must remember these are still in the form of anecdotal … but it appears that with the cases that are seen, we are not seeing a very severe profile of disease,” Fauci said during a White House briefing.

“In fact, it might be and I underscore might be, less severe as shown by the ratio of hospitalizations per number of new cases,” Fauci added.

Caveat: He said the low hospitalizations could be influenced by the fact that younger people are the ones getting infected, since they are less likely to be hospitalized.

“Real-world evidence is accumulating rapidly, literally on a daily basis, to allow us to determine increase in cases, possible increase in reproductive number and the rapid replacement of delta by omicron in certain situations,” he said.

Fauci also said data about the effectiveness of vaccines on the variant could start to be ready by the middle of next week.

US INVESTING $315M IN VACCINE DELIVERY

The Biden administration is investing an additional $315 million to help deliver COVID-19 vaccines in low- and middle-income countries as the omicron variant of the coronavirus highlights the need to vaccinate the world.

United States Agency for International Development Administrator Samantha Power made the announcement during a global COVID-19 meeting on Monday, saying the world is at an “inflection point” in the fight against the virus.

The new funds are part of an increased focus on getting shots actually into arms around the world, not just delivering the vaccines themselves, Power said.

“The appeal from our partner nations has expanded,” she said. “They are not just asking for doses; they are urging us to provide support that will allow them to administer those doses.”

The $315 million in new funds will help with cold storage and other logistics, as well as in launching mobile vaccination sites and deploying health workers, USAID said.

Advocates push for more: “After millions of COVID-19 deaths, the United States’ global response to combatting the pandemic has mainly consisted of drips and drabs,” said Steve Knievel, an advocate at the progressive group Public Citizen’s access to medicines program.

“A few hundred million dollars to support global vaccine delivery is welcome, but significantly bolder, urgent action is needed to bring the pandemic under control,” he added.

“It would be a tragedy if we beat back one public health crisis only to allow another to grow in its place,” Murthy said in the advisory’s introduction.

The advisory pointed out a rise in symptoms of depression, anxiety and other mental health conditions among young people during the pandemic, as more than 140,000 are estimated to have lost a parent or caregiver.

“As we learn the lessons of the COVID-19 pandemic, and start recovering and rebuilding, we have an opportunity to offer a more comprehensive, more fulfilling, and more inclusive vision of what constitutes public health. And for a generation of children facing unprecedented pressures and stresses, day in and day out, change can’t come soon enough,” the advisory said.

Pfizer may be less effective against omicron 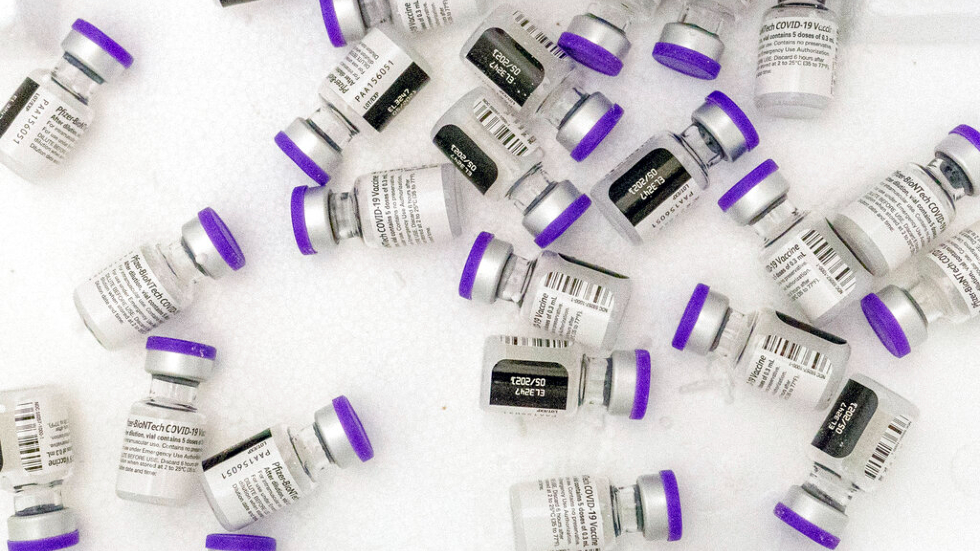 The omicron variant of the coronavirus partially evades antibody immunity from two doses of the Pfizer-BioNTech vaccine, according to initial data from South Africa published Tuesday.

The small study of 12 patients conducted by the Africa Health Research Institute found there was about a 40-fold reduction in vaccine-induced neutralizing antibodies compared to the ancestral strain of the virus.

Six of the 12 people were previously infected with COVID-19 during South Africa’s first wave.

However, the study showed that people with previous infection who had also gotten vaccinated had considerably higher levels of antibodies.

The study did not include people who received booster doses, but the study authors and health experts said the protection levels from a booster could mimic a previous infection after vaccination.

Implication: Experts have predicted that the omicron variant would likely lead to some drop in neutralizing antibodies, because of the large number of mutations on the virus. The results aligned with that theory, but also showed that protection wasn’t totally lost. A 40-fold decrease in antibodies is not great, but that is only measuring one type of immune response, and it doesn’t necessarily equate to vaccine effectiveness.

Caveat: This study was small, and there will be more data coming from other studies, which will help experts form a broader picture of the impact of the new variant. Anthony Fauci, the nation’s top infectious diseases doctor, said Tuesday he expects it will take until at least next week before information about vaccine effectiveness is understood.

Omicron is an unwelcome but predictable lesson in the Greek alphabet

Seniors died from COVID-19 at a higher rate than any other age group this summer: analysis

Citing Ebola concerns, US to divert and screen all travelers from Uganda