Hillary Clinton’s campaign wants to harness the addictive appeal of smartphone games to encourage her supporters to help elect her to the White House.

The Democratic nominee’s campaign this week rolled out a new smartphone app that bears all the hallmarks of popular mobile games like Candy Crush or Angry Birds. Clinton supporters complete small tasks for the campaign to pick up achievement badges, earn rewards and move up a nationwide leaderboard.

The app is a prime example of “gamification,” the use of elements from the gaming world to motivate people, in politics.

“Any way you cut it, games on the app store are the highest performing apps,” said Stephanie Cheng, a senior product manager with the Clinton campaign who led the development of the app. She added that mobile games are especially popular with demographic groups important to the campaign.

“So we thought this would just be such a great fit and such a great framework for getting people to come back and engage with us, for getting our supporters to know exactly what they should do every day — what it means, what the impact is, and what they get for it,” she said.

“And, also, it’s really nice wrapping paper: it’s fun and pleasant and an opportunity for us to do a lot of fun things.”

When they open the app, users see a cartoon drawing of a sparsely furnished campaign field office. The virtual office looks lived in, with a slice of pizza sitting on a table and a bottle of hand sanitizer on someone’s desk.

From there, the app gives supporters small actions to take on behalf of the campaign. They can take a quiz that will teach them about some of Republican nominee Donald Trump’s past positions, for example, or share a video from this week’s Democratic National Convention with their friends.

A blue ring tracks their progress, measuring the percentage of tasks they have completed for that day. 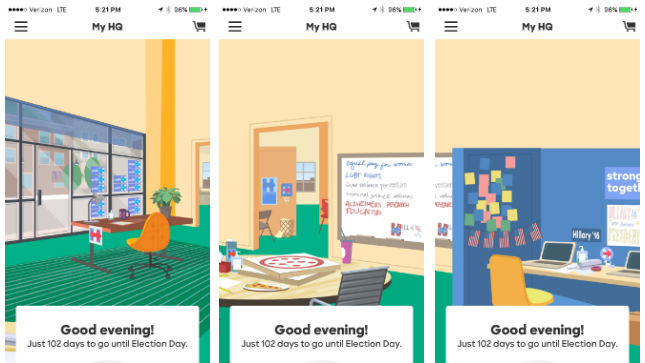 Supporters are also awarded badges and in-game currency for completing tasks. That currency can be exchanged for new “decorations” to dress up their virtual field office or traded in for real-world rewards like an autographed Clinton campaign sign. They also earn points, which contribute to weekly rankings of top users on the app.

The campaign also lets users enter data, like their hometown or top issues, that could be useful to the campaign. Cheng said a lot of the data gathered by the app is a “way for us to expand our network and make sure we’re talking to the right people.”

She declined to say how many people had downloaded the application as of Wednesday but described the response as encouraging.

The game-like elements are the campaign’s response to a particular challenge they identified during the months-long development process for the mobile app.

“As we were talking to supporters, we heard a lot of things like, ‘I like Hillary a lot. I’m definitely going to vote for her, I like her on Facebook, but it’s really scary to go knock on doors and do some of the more traditional ‘asks’ like phone banking,’ ” said Cheng.

“So, how do we bridge this gap and get supporters from one point to another and make it feel less daunting and less intimidating?”

The campaign is betting it can do this by giving those supporters small, manageable tasks and building an exciting way for them to complete them.

“If you have three minutes a day, you can open the app, do your challenges,” said Cheng.

It’s an approach Cheng learned while in the entertainment industry, including in the animation division of Dreamworks, and as the co-founder of a mobile gaming startup. The campaign’s mobile team of seven also includes staffers who came from companies like Etsy and Livestream.

Trump also plans to deploy a mobile app to rally his supporters in the near future, according to Brad Parscale, the campaign’s digital director. It will give the campaign ways to connect with supporters and include some elements from mobile gaming.

“I think gamification is a fun way to keep people engaged in the political process,” he said.

Clinton and Trump’s teams are not the first campaigns to turn to the strategy to motivate supporters.

In 2012, President Obama’s reelection bid used a digital dashboard that allowed volunteers to compare stats on their efforts with other supporters. The campaign’s mobile application, in contrast, was focused on providing information to supporters in a more traditional way and giving them tools to use while canvassing neighborhoods.

Paul Murphy, the chief executive and co-founder of mobile gaming company Dots, said he thought the Clinton campaign had done a good job of integrating gaming elements into the application without overwhelming users.

He said that the app is using “a really simple daily engagement system.”

“It’s not rocket science, but it was done right and I think it was done for a broad audience and they didn’t try to over-engineer or gamify the experience,” he said. Murphy said he has donated to Clinton’s campaign.

Cheng says that in the coming months, the application will draw on the campaign’s organizing apparatus, in the hopes of converting hesitant supporters into in-person advocates for the campaign.

“I think the thing we are most excited about is to integrate deeper with our field program and to translate more online to offline action,” she said.

Asked if he thought that was possible, Murphy said it’s clear gamemakers are able to coach users into taking real-world action.

“Well, there’s this little game that you might have heard of called Pokemon Go which is doing that, I think, pretty successfully,” he said.