Welcome to Hillicon Valley, The Hill’s newsletter detailing all you need to know about the tech and cyber news from Capitol Hill to Silicon Valley. If you don’t already, be sure to sign up for our newsletter with this LINK.

BRING IN THE CENSORS: A federal appeals court on Wednesday ruled that internet giants like Google and Facebook can censor content on their platforms, rebuking arguments from conservatives who claim the tech companies violate users’ First Amendment rights by removing certain messages or videos.

With its unanimous opinion, the 9th U.S. Circuit Court of Appeals became the latest court to dismiss arguments that platforms like YouTube can be sued under the First Amendment for decisions on content moderation.

“Despite YouTube’s ubiquity and its role as a public-facing platform, it remains a private forum, not a public forum subject to judicial scrutiny under the First Amendment,” Circuit Judge M. Margaret McKeown, a Clinton appointee, wrote in the opinion.

The three-judge panel upheld a lower court’s decision to dismiss the case.

Prager U lost the case when U.S. District Judge Lucy Koh, an Obama appointee, declared that YouTube is a private company and therefore can’t be treated similarly to state actors.

Prager argued that YouTube, which has 2 billion users worldwide, functions as a “public square” because of its ubiquity.

But on Wednesday, McKeown wrote, “YouTube does not perform a public function by inviting public discourse on its property. To characterize YouTube as a public forum would be a paradigm shift.”

Google has continued to insist that its products are not politically biased and that Prager’s claims were “meritless.”

Read more on the ruling here. 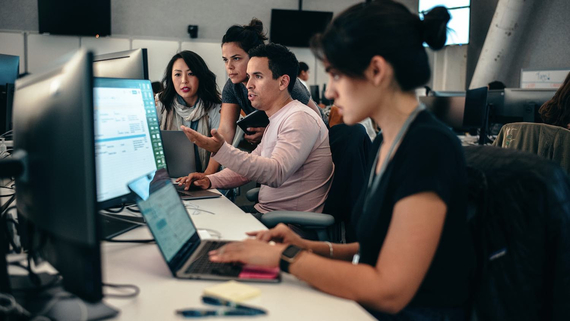 Facebook has made large investments to protect elections, including tripling the size of the teams working on safety and security to more than 35,000. But the work doesn’t stop there.

CURVEBALL: Sen. Rand Paul (R-Ky.) said Thursday that President Trump backs his proposal to include reforms to the surveillance court as part of a bill reauthorizing expiring intelligence programs, complicating the path forward for the legislation.

“The [Foreign Intelligence Surveillance Act] FISA reforms that I think are very necessary is that FISA warrants shouldn’t be issued on Americans and any information gathered by the FISA court shouldn’t be used against Americans. It’s for foreign intelligence. This is a big reform. … I think it will get bipartisan support. I’ve talked to the president about it,” Paul said.

Paul said he would insist on a vote to get the reforms to the Foreign Intelligence Surveillance Court he is pushing for included in any bill to reauthorize three expiring provisions of the USA Freedom Act.

“He’s supportive of my amendment,” Paul added, when asked about his conversation with the president.

Trump’s decision to back including reforms to the surveillance court in the intelligence bill puts him at odds with Senate GOP leadership and Attorney General William Barr, who told Republican senators in a closed-door lunch on Tuesday that the president would back a clean extension.

The Hill’s Jordain Carney has more here on how Trump is upending the surveillance fight.

POST-IMPEACHMENT HAZE: Just one month after arguing on a united front for President Trump’s removal from office, three former House impeachment managers team are locked in a fierce battle over a controversial government surveillance bill.

Rep. Zoe Lofgren (D-Calif.), a senior member on the House Judiciary Committee, threw plans to reauthorize some intelligence provisions in the USA Freedom Act into a tailspin Wednesday after she threatened to hold votes on several surveillance-related amendments.

The move not only forced Chairman Jerrold Nadler (D-N.Y.) to postpone consideration of the broader legislation, which he negotiated for months with House Intelligence Chairman Adam Schiff (D-Calif.) and Speaker Nancy Pelosi (D-Calif.), it also pitted the two chairmen against a former teammate from the weeks-long Democratic effort to carefully lay out a case against Trump during the Senate impeachment trial.

The back and forth comes amid a debate over whether to pass a reauthorization bill that could glide through the Senate or one heavy with reforms that might fail to garner enough support for passage in the upper chamber.

A group of House Democrats and Republicans want to fold in amendments to reform the Foreign Intelligence Surveillance Act (FISA) court following a government watchdog’s assessment last year that found 17 “significant errors and omissions” by law enforcement officials in their efforts to obtain a wiretap on former Trump campaign adviser Carter Page.

Lofgren, who dismissed the notion that there was a personal rift between her and the two Democratic chairmen, is pushing to introduce legislation that would create more oversight over the FISA court and significantly curtail the amount of sensitive information the government is allowed to collect on Americans. She felt Nadler and Schiff’s bill did not go far enough to achieve that.

“This is about policy,” Lofgren told The Hill in a phone interview, noting that she attended a reception for impeachment managers with both Nadler and Schiff on Wednesday night, just hours after the showdown over the surveillance provisions.

“I’m pursuing a policy that I think is consistent with the Constitution and serves the American people,” she continued, adding that doing so “is not new for me.”

Lofgren’s FISA amendments upset the chairmen’s hopes of moving forward a clean bill. The future of the controversial government surveillance provisions is now in limbo with a mid-March deadline approaching.

And despite the claims of amicable relations, some Judiciary sources described a lingering rivalry between the two, citing this tug of war over surveillance policy as the latest example.

Asked about progress in the FISA negotiations, Pelosi acknowledged the delay over key sticking points but also expressed hope that a compromise is possible before the programs expire on March 15.

“I was there for some of the FISA revisions in the past,” Pelosi said Thursday at her weekly press conference. “The goal is to have the right balance between civil liberties and national security. I think the bill that was put together in the Judiciary Committee, working with the Intelligence Committee, does that. There are others who would like to see some other provisions, we’re just working through that now, with respect for everyone’s point of view.”

Read more on the fight in the House here.

Facebook has made large investments to protect elections, including tripling the size of the teams working on safety and security to more than 35,000. But the work doesn’t stop there.

BAD NEWS FOR HUAWEI: The Senate unanimously approved legislation on Thursday that would ban the use of federal funds to purchase telecommunications equipment from companies deemed a national security threat, such as Chinese group Huawei.

The bill would require the FCC to establish a $1 billion fund to help smaller telecom providers to rip out and replace equipment from such companies, and to compile a list of firms seen as posing a threat to telecom networks.

“Telecommunications equipment from certain foreign adversaries poses a significant threat to our national security, economic prosperity, and the future of U.S. leadership in advanced wireless technology,” Wicker said in a statement. “By establishing a ‘rip and replace’ program, this legislation will provide meaningful safeguards for our communications networks and more secure connections for Americans.”

The legislation, if signed into law by President Trump, would have a major impact on rural telecom providers. The Rural Wireless Association estimated in a 2018 filing to the FCC that around 25 percent of its member companies use equipment from either Huawei or Chinese group ZTE.

Facebook first banned the sale of firearms on the platform in 2016, then in 2018 it added proactive measures to identify sellers after pressure from lawmakers.

“We have concerns that those measures fall short,” the lawmakers led by Sens. Bob Menendez (D-N.J.) and Ed Markey (D-Mass.) wrote in the letter to Facebook.

The senators are demanding answers to a series of questions — including how many private groups Facebook has banned for violating the firearm sale policy and how the company coordinates with law enforcement — by March 12.

CORONAVIRUS CONCERNS: Facebook on Thursday announced it is cancelling its annual developer conference because of the spread of the coronavirus.

“This was a tough call to make — F8 is an incredibly important event for Facebook and it’s one of our favorite ways to celebrate all of you from around the world — but we need to prioritize the health and safety of our developer partners, employees and everyone who helps put F8 on,” Konstantinos Papamiltiadis, director of platform partnerships at Facebook, wrote in a blog post announcing the cancellation.

“We explored other ways to keep the in-person part of F8, but it’s important to us to host an inclusive event and it didn’t feel right to have F8 without our international developers in attendance.”

The annual conference was scheduled for May 5 and 6 in San Jose, Calif.

The Centers for Disease Control and Prevention confirmed Wednesday the first U.S. coronavirus case of unknown origin in Northern California. On Thursday, California Gov. Gavin Newsom (D) said the state was monitoring over 8,400 people for the virus.

THAT’S A NO: More than 150 faculty members and academics have signed on to a campaign opposing the use of facial recognition technology on college campuses.

Their letter, published online Thursday, urges institutions of higher learning to ban the technology, which scans faces for the purpose of identifying individuals, citing bias and civil rights concerns.

“We believe it is our duty to protect our campuses as learning environments where our students, fellow staff, and community members are safe, and that the constant surveillance of facial recognition threatens our human rights and privacy,” wrote the current and former educators from schools including Harvard, Yale and Stanford.

“Students should not have to trade their right to safety and privacy for an education.”

The letter from educators is part of a wider campaign led by Fight for the Future and college group Students for Sensible Drug Policy to block the controversial tech from colleges.

THE RUSSIANS ARE COMING: An online “impersonator” pretending to be a Democratic National Committee (DNC) staffer tried to contact presidential campaigns, including Sen. Bernie Sanders’s (I-Vt.) campaign, the committee said in a statement to the candidates Wednesday.

Bob Lord, the DNC’s chief security officer, wrote in an email to the campaigns obtained by The Hill that “adversaries will often try to impersonate real people on a campaign.”

He added that the “adversaries” could try to get campaign workers to “download suspicious files, or click on a link to a phishing site” or set up calls or in-person meetings to record and release.

Lord warned that the “impersonator” contacted the Sanders campaign and at least two others and had a domain registered overseas. But he acknowledged that anyone can register a domain name in any country.

“Attribution is notoriously hard,” he wrote. “The appropriate authorities have been alerted.”

“If you are using an alternate domain, please refrain from doing so and let us know if you are operating from a domain that others have not corresponded with before,” Lord added. “Do not use your personal mail account for official business.”

AN OP-ED TO CHEW ON: There’s no election law about social media disclosures–but there oughta be

Manchin surprised by McConnell opposition: ‘You can be a hero one day and a villain the next’

US faces bleak options as Putin turns bellicose on nukes

Riggleman: After I criticized Trump, my mom texted me, ‘I’m sorry you were ever elected’